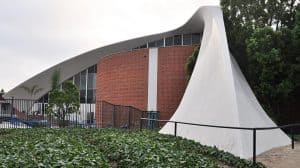 At a quick holiday meeting on Valentine’s Day, the school board needed to convene over an impending crisis, summed up in a few words; Robert Frost Auditorium – and asbestos.

With the district’s landmark performing space under remodel since the beginning of the school year in September, performances by theater, music and dance programs have reached out through the city, from the Ivy Substation to the Vets Auditorium. Finding other performance space will be necessary well into 2018 as the challenges in the remodel and beautification become more complex and more expensive.

Chris Dunn, of Harris and Associates, made the presentation to the school board.  “The Robert Frost had another asbestos spill, and will require much more extensive demolition on the interior walls to make the building safe for use. While there were inspections throughout the last decade [that declared the building safe] , you can’t really know what’s inside the wall under you open it up, and the asbestos that was discovered is very significant.”

The lobby walls, the area around the sound booth and all the accoustical material will need to be demolished, and the areas cleaned before it is safe for construction to begin again.

Dunn offered that “major demolition will actually be less expensive than a smaller step by step clean up  and with two containment areas, this is going to take time.”

In addition, leaks in roof need to be dealt with while the building is still empty.  Roof repair does not come under the construction or beautification budget, but out of maintenance.

School board member Kathy Paspalis noted “Just as well that it’s happening now, and the roof isn’t leaking over the new seating or the new carpets.”

Dunn estimated an additional $3.4 million dollars would be needed for the demolition and asbestos clean up. When we gave you the budget last month, we said $2 million, but our estimate now is $3. 4, including some of the work that’s already being done to make the building safe. That brings us up to $22.7 million, that’s $1.8 million more than we told you last month.”

Superintendent Dr. Josh Arnold had no qualms. “The longer it takes for Frost to re-open is just the amount of time we need to do it right. I think if you open Frost and it’s not beautiful, there will be concerns. Frost is not going to be [remodeled and repaired] again anytime soon, and its going to take what it takes.”

School board member Steve Levin asked “Do we know that we are done with overruns? Have we found all the asbestos everywhere that we can look?”

Dunn noted again that previous asbestos inspections had made no indication of a problem this size, but, “This is an old building, and while we have reports that say it was abated, taking a sample can give you a different answer than demolishing a wall.”

“We are close to gutting the whole building.”

A special board meeting will be held during spring break to re-bid the construction for the ‘front of house’ area in the theater, as the asbestos crisis now puts the previous re -bid “up on blocks.”