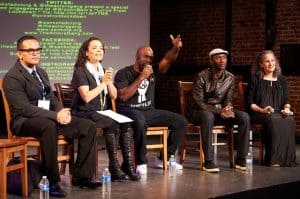 The Actors’ Gang today announced a series of post-show talkbacks following the remaining performances of Lyrics From Lockdown, written and performed by Bryonn Bain and directed by Gina Belafonte, which is currently performing through Saturday, February 25, 2017 as part of The Actors’ Gang Season of Justice at The Actors’ Gang Theatre, 9070 Venice Blvd. in Culver City.

Alfre Woodard, Gina Belafonte, Tavis Smiley, Gaye Theresa Johnson, and more are scheduled to discuss the issues brought forth in this powerful and inspirational story.

The groundbreaking multimedia production tells Bryonn Bain’s true story of racial profiling and wrongful incarceration at the hands of New York City police and how this experience led to a transformative friendship with death row inmate Nanon Williams.

Lyrics From Lockdown is an important and necessary story told with a voice as fresh as today’s headlines,” said Artistic Director Tim Robbins. “With poetry, musicians and striking visuals, Bryonn Bain and Gina Belafonte give us a first hand look into racial profiling and a deeply flawed criminal justice system in a powerful evening of theater.”

Under the direction of Gina Belafonte, Lyrics From Lockdown weaves the voices of over 40 characters into an extraordinary, internationally acclaimed tour de force. This one man multimedia production features a live band and VJ and a fusion of hip hop, theater, spoken word, rhythm and blues, calypso and classical music, to tell Bain’s story.

After being unjustly stopped and frisked outside of a NYC nightclub, the then-Harvard Law School student was thrown into jail. Once released, Bain recalls writing poetry, rhymes, and what later became a cover story for the Village Voice. His story, “Walking While Black,” received the largest response in the history of the nation’s most widely-read progressive newspaper. Soon after, Bain’s law school professor Lani Guinier suggested that he create a “hip hop opera.” From there “Lyrics From Lockdown” was born.

The play also introduces the audience to Nanon Williams, a young man who was sentenced to death at age 17 for a crime he did not commit. Nanon wrote Bain from Death Row after reading his story nearly a decade ago. “His letters changed my life,” Bain said. “He asked me to share his story and I was so moved by it that I weaved his letters into Lyrics so you see how this young poet — unjustly robbed of his youth — is inspiring a global movement to free himself and others unjustly thrown into prison.”

“Art and culture are creative tools to educate, organize and mobilize a movement. The criminal justice system has hit pandemic proportions and our level of engagement as a community is vital to bring solution and alternatives to this crisis,” director Gina Belafonte said. “Bryonn Bain’s Lyrics From Lockdown is an exemplary offering of the engagement of arts in activism and a vision of an equitable and transformative world.”

General tickets are available for $34,99. Seniors and students may purchase $30.00 tickets. Thursday evenings are “Pay-What-You-Can.” For tickets, please call 310-838-4264 or visit www.theactorsgang.com to purchase tickets online or to view the complete schedule.  The Actors’ Gang Theatre is located at 9070 Venice Blvd, Culver City, CA, 90232.