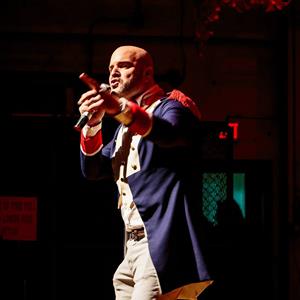 While the rain pattered gently down on the Vets Auditorium on Friday Feb. 10, the rainbow was inside. The Front and Center Theater Extravaganza offered a showcase for all the theater programs that participate with the Culver City Unified School District to offer children the magic of theater.

While teaching creativity is understood to be important by most educators, CCUSD offers more theater classes to more students than any other district in California – a state that thrives on a creative economy.

With six organizations as partners, The Actors’ Gang, Center Theater Group, We Tell Stories, the 24th Street Theater, Story Pirates and Young Storytellers, the district notes 475 hours of theater arts programming for 4500 students. Theater is part of the curriculum from kindergarten through high school, with every aspect of stage craft from improvisation to lighting design available for study.

The roll up to the evening had rainbow ribbons offered for decoration at a number of district venues, with Heather Moses, the program manager and event producer, asking people to write down their wish for arts education. The ribbons were then used to decorate the foyer at the Vets Auditorium, putting the rainbow theme to use with some fun, functional artwork.

The evening began with both Academy of Visual and Performing Arts Jazz Band and Improv Players entertaining while families entered, and every foot of the building was utilized to full capacity. The six theater companies making presentations were joined by the AVPA Visual Art class as the first part of the program invited guests to participate, taking each room at the Vets and using it for one of the groups. 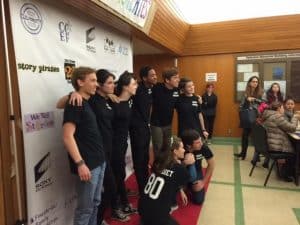 materials.  On display were the masks that students made based from this semester long project using various fairy tales from many cultures as well as the play ‘The Last Firefly’ by Naomi Iisuka. AVPA student Isabella Bustanoby enthused, “The masks were a lot of fun, and kind of challenging; the play was really inspiring, and it gave us a direction to aim towards with the project.”

The interactive groups “We Tell Stories” and “Story Pirates” took the moment to show their stuff to interested parents and devoted students, and the ‘Young Storytellers” introduced their concept to a room of friends, parents and students, offering wordplay and an almost “mad lib” format for movie ideas.

Two short workshops were offered by each company so that people had the chance to sample a variety. 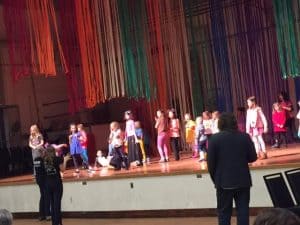 When the Auditorium filled for the presentations, rainbow ribbons framed the stage.

The most audacious act of the evening was District Superintendent Dr. Josh Arnold, resplendent in a revolutionary war era coat, doing a “Hamilton” style rap about the schools, the arts, and of course, fundraising. Using a text prompt to encourage donations, there was a rolling display where donations and dedications were visible.

While the pot of gold grew larger, it was commented on by several in the audience that the real treasure was clearly the delight of the students, whose enthusiasm was unrestrained.

The evening ended with an all-grade school chorus singing “Over the Rainbow,” an emphatic underscore to the fact that Culver City is a place where creativity is the past, the present, and most certainly the future.