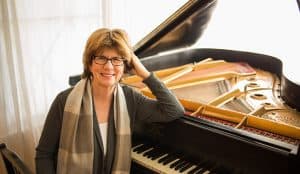 When producers for La La Land needed someone to prepare Ryan Gosling for his role as a jazz piano star, Culver City’s own Liz Kinnon got the call. The gig was a unique challenge for Kinnon with an unprecedented goal. In three months, she had to take a student with inherent musicality, but who had never studied piano nor read music, and prepare him to play specific pieces to seamlessly emulate a seasoned star, both musically and physically. Kinnon, a jazz pianist, composer, arranger, and teacher with decades of experience, was up for the task and determined to succeed.

For the past seven years, Kinnon has worked with pianists of all ages and adult jazz groups in the Colburn Community School. In a phone interview, she described the process of working with Gosling on the project.

When were you approached to do this, and by whom?
One of the producers got my name from [Community School Assistant Dean] Sara Hiner because they were specifically looking for a jazz teacher, someone familiar with the jazz genre of piano playing. They called me and I had a few interviews with different people, including the director Damien Chazelle. When I heard nothing for two months, I just figured it wasn’t going to work out for some reason… it’s Hollywood, after all! Then a couple months later I got an email from the same producer that said the project had been delayed but was back on, and there’d been a change in the cast: instead of Miles Teller the new lead was going to be Ryan Gosling.

I talked to one or two more people and they got a sense of who I am. It has to be a good fit, especially when you’re working that closely with someone. Finally, I went and met with Ryan. We talked about music, family, and I got an idea of what he already knew, which was not a lot, but he’s a very musical guy.

Once working together, how often did you meet?
They told me five days a week for two hours a day was what he wanted. I thought, “Wow, that’s a lot,” but made it happen. Having grown up in LA, I’m not a star struck person, but rather it was a very fascinating challenge to me because I had never done anything like that before. I worked with him those five days a week for three months. When they started filming, I was on set whenever he was playing for guidance and support, as well as being a piano expert resource for the director.

The music team on this film was fantastic. The people I worked most closely with were the music supervisor, executive music producer, engineer, and the director. They were stellar in every way.

What were the main goals? Playing well, playing convincingly?
The goal was to play convincingly for the role of a serious jazz pianist. He was very serious and wanted to be as authentic as possible. He learned to play well enough that no doubles were used; it was always his hands and his body.

How was preparing someone to play for a movie role different than working with other adult students?
We really had a goal and a strict deadline. There’s no way that anybody could learn to play that level of jazz piano in the amount of time we spent because the role was for him to be a very serious jazz pianist with decades of study. So for the amount of time we had and the material we had to do, it was a very different approach. For example, if we had a long scene and the camera was only on him for a certain amount of time, we had to prioritize what we concentrated on more than just learning the piece top to bottom. From a technical standpoint, we were more focused on the physicality of the playing and what would need to be seen to be convincing in terms of matching what we were hearing. It was an obsession for me to prepare him to the highest possible standard.

It’s different than how I work with a normal private student, but one thing that is similar is my personal philosophy of very individualized teaching. It’s so important to have a good fit, teacher-student trust, and honest communication. With no formal training, Ryan did not read music at all, so our work was all by rote. Fortunately for me, he is very musical, has good rhythm, and has nice natural piano hands; he just didn’t know what to do with them in the beginning.

How did you prepare as a teacher?
I did lots of preparation and analysis for every piece of music we did so that I would have a game plan for myself in terms of how to communicate what was important. I spent a lot of time planning and analyzing the best way to approach each piece of music. That step was critical.

I had to think a lot about what would be the most efficient and visually convincing way to approach each piece of music, along with all of the musical elements of playing the piano in a particular style. However, everybody has a different style of playing, so I wanted to consider and respect Ryan’s individuality… as all artists bring something of themselves to their art.

Do you have any reflections on the process?
It was challenging, rewarding, and definitely a highlight of my career. I learned a lot and hope to do more of it.