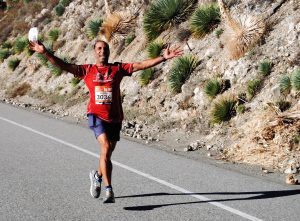 Chosen among hundreds of elite Southern California distance runners, Screenland 5K committee member Hamid Rostamian was selected by Los Angeles Marathon organizers to pace runners in the Pasadena Half-Marathon, Jan. 22, and return to carry the coveted pacer’s flag in the Los Angeles Marathon, Mar. 19.
“I feel honored to be selected among hundreds of great runners in the area,” said Rostamian, who runs 50 miles a week from his Culver City home in Carlson Park to the beach and back before heading to work. “Running provides me with serenity and peace,” said Rostamian, whose son Armand runs for the Culver City High School cross country team.
Rostamian, who will lead runners and walkers in the Screenland 5K, Feb. 26, to celebrate the Culver City Centennial, suggests first time participants focus on the satisfaction of finishing with a steady and relaxed pace throughout the 3.1 mile course rather than pushing themselves for a specific time.
“Especially with the Screenland 5K, the runners and walkers should simply enjoy the experience. It will be a treat to take in all of the attractions along the course. We’ll have a fun time. What a great way to celebrate a 100th birthday,” said Rostamian.
Rostamian joins a list of elite athletes who have trained with Screenland 5K participants. Rio Olympic Games gold medalist Allyson Felix ran sprints with Culver City students at a recent sports symposium to prepare for the Screenland 5K. Felix, who is the most decorated female track and field athlete in US history, was accompanied in the workshop by Olympic medalist Shawn Crawford, who is a four-time national outdoor 200-meter champion, and track star Ginnie Crawford, a two-time NCAA and USA titleholder. Ginnie will be leading the student, family and faculty team from Turning Point School in Culver City in the Screenland 5K on Academy Awards Sunday.
About 70 runners and walkers trained with Rostamian, Kaizuka sister city marathon runners David Winslow and Matt Seeberger, the Centaur cross country team and New York Marathon champion Rod Dixon, this past Sunday, at Culver City High School track. The one-hour free sessions are conducted every Sunday, 4 p.m., until race weekend.
Run as your favorite screen star down the yellow brick road through Sony Pictures and Culver Studios storied backlots, a wizard’s rainbow and 100 points of Culver City lore on the Centennial Trail in the race of the century on Academy Awards Sunday in the Heart of Screenland during the Culver City Centennial Celebration. To register, www.Screenland5K.com.