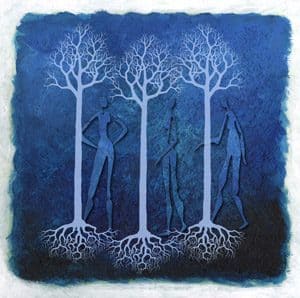 The protagonist, a compelling woman more than 90 years old, reflects on her life with a mixture of shame, pleasure, regret, and satisfaction. She recalls the fun of her childhood and her early marriage, when she felt an overwhelming optimism. She also bitterly recalls negative events that caused her regret: her husband’s affairs and death, and the estrangement of her gay son.

A: She is a very old woman in her 90s. She is thin, autocratic, proud, and wealthy. She also has a mild case of dementia.

B: B is a 52-year-old version of A, to whom she is the hired caretaker. She is markedly cynical about life. Although she doesn’t enjoy working for A, she learns much from her.

C: C is a 26-year-old version of B. She is present on behalf of A’s law firm, because A has neglected paperwork, payments, and such. She has all of youth’s common self-assurance.

The Boy: The son of the three women, he does not play a speaking role but is the subject of much discussion among them. A falling-out between the son and his mother(s) is the cause of much of A and B’s despair.

The woman’s relationship with her son is the clearest indication that Albee was working through some troubled memories of his own in Three Tall Women. Raised by conservative New England foster parents who disapproved of his homosexuality, he left home at 18 like the son in this play. Albee admitted to The Economist that the play “was a kind of exorcism. And I didn’t end up any more fond of the woman after I finished it than when I started.”

All of our Pulitzer Prize Play Reading Series evenings will be presented as “ Pay What You Can Nights”, an Actors’ Gang tradition intent on making performances accessible to all, regardless of socio-economic status.