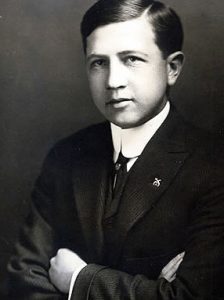 In celebration of our city founder, Harry H. Culver’s birthday, City Historian Julie Lugo Cerra will offer a look back into Culver’s dream city on Wednesday, January 18, 2017 at 7 p.m. during the Culver City Historical Society’s January general meeting and program, open to the public.

Born January 22, 1880, in Milford, Nebraska, Harry Hazel Culver began his Southern California real estate development career under Issac Newton Van Nuys in 1910. In 1913, Culver announced his plans for what was to become Culver City in a speech at the California Club, and the city was incorporated in 1917. In 1915, Culver convinced Thomas Ince to move his studios from Pacific Palisades, opening the first of Culver City’s major motion picture studios, and The Heart of Screenland was born.

We enjoy a wonderful tie to our founding family. Many of us remember the Culvers’ only child, Patricia, helping out at the annual La Ballona fiestas, even taking our bus tours as a special guest. She also was a ready resource for photos and records of Harry Culver’s life and plans. Cerra will give a visual presentation and discussion using many of these materials. Pat Culver Battle’s tradition of being a ready resource now continues with Harry’s grandsons John Battle and Chris Wilde, both honorary lifetime Historical Society members.

To coincide with this program, the ARC will have special Culver-related items on display, like the original ads that Culver designed to draw residents and businesses to Culver City.

Historical Society members and the general public are invited to enjoy this free program in the Multipurpose Room in Veterans Memorial Building, located at 4117 Overland Avenue. The entrance to both the ARC and Multipurpose Room is through the back of the building and open to the public.

About The Culver City Historical Society: Founded in 1979, the Culver City Historical Society was created for the purpose of collecting, preserving and exhibiting the history, cultural and civic accomplishments of Culver City and its surrounding areas. General meeting programs are held quarterly in the Multi-Purpose Room of Veterans Memorial Building, which are open to our members and the general public. The Historical Society Archives & Resource Center (ARC) is open the 1st and 3rd Sundays of every month from 1 p.m. to 3 p.m., and by appointment. For additional information please visit www.CulverCityHistoricalSociety.org and like us on Facebook: www.facebook.com/CulverCityHistoricalSociety