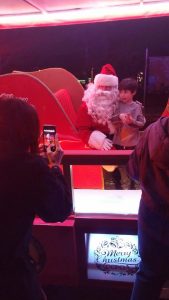 Culver City’s 99-year-old police department was out entertaining kids and maintaining community relations the last few weeks with their traditional Santa Sleigh program.
Launched in 1984, it was, “born of an idea that the goodwill that Santa Claus builds transcends all races and religions,” according to their website.
The Culver City Police Officers Association has been out every December for 32 years escorting Santa and his helpers on his sleigh with lights flashing and sirens blaring to different street corners around Culver City’s borders. Once on site, Santa welcomes kids and families with high fives, candy and hugs and poses for photos. Everyone is a volunteer police officer, family member or community supporter.
Santa was able to welcome children suddenly shy when confronted by a large man with a big white beard dressed in red with an easy laugh and big smile, They settled on his lap or by his side and beamed smiles at doting parents. The circle of the neighborhoods takes Santa through most of Culver City, and it has been a tradition much enjoyed by parents and children both. It was a merry, merry holiday for Culver City citizens and the Santa crew from the CCPD.