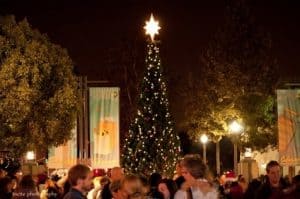 All the latest from the City Manager, Parks and Recreation, Fire Department, Senior Center and more –

Senator Holly J. Mitchell’s Staff Meets with the Mayor – On December 14th, Mayor Jim B. Clarke met with Senator Holly J. Mitchell’s District Office and Capitol staff. Mayor Clarke and the Senator’s staff discussed affordable housing, mansionization, the City Council adopted Legislative and Policy Platform, and the Strategic Plan among other issues of mutual concern. The staff members visited the City Council Chambers and stopped by the first floor of City Hall where they met Kim Dame, from the Finance Department, who decorated the Centennial-themed Christmas Tree. The public is invited to check out this unique tree at City Hall!
Ivy Station Transit Oriented Development Project – The City is pleased to announce that construction on the Ivy Station transit oriented development project, which is anticipated to begin in February 2017. Metro’s Culver City Station parking lot (between Washington, National, and Venice Boulevards) will close on or about February 6, 2017 to make way for project construction. Construction will run through 2019. During the construction period, alternative parking will be available at the Ince Parking Garage (9099 Washington Boulevard) in downtown Culver City or at the nearby La Cienega Boulevard/Jefferson Boulevard Metro station. Please click here for more information, including how to implement a residential permit parking district.

Fire Department
Spark of Love Toy Drive – The Culver City Fire Department is collecting toys at all three fire stations through December 24 in support of the Spark of Love Toy Drive. As part of the greater Southern California campaign, the Culver City Fire Department is collecting new, unwrapped toys and sports equipment for under-served children and teens in and around Culver City. Feel free to donate toys and sports items at any of our three fire stations:
Station 1 – 9660 Culver Boulevard
Station 2 – 11252 Washington Boulevard
Station 3 – 6030 Bristol Parkway
For additional donation options, events, and donation item suggestions, please visit the Spark of Love website.

Thank You to the Red Cross and California Fire Foundation – At approximately 3:40 a.m. on December 13th, Fire Department units were dispatched to a structure fire on the 3900 block of Sepulveda Boulevard. Crews arrived on scene to find a two-story apartment complex, with one unit involved in fire. 18 firefighters made an aggressive attack and had a knockdown within six minutes. The fire was limited to the front room of one apartment. Culver City fire investigators are in the process of determining the cause and dollar loss. There were no civilian or fire personnel injuries. Seven people were displaced due to the fire. The Red Cross is making temporary housing available to all seven people. The Fire Department also gave a family impacted by the fire a SAVE gift card. SAVE stands for Supplying Aid to Victims of Emergency. It is a program provided by the California Fire Foundation. The SAVE program gives CCFD firefighters a way to provide immediate short-term support to displaced victims in the aftermath of a fire through $100 gift cards. The card allows eligible victims displaced by fire or natural disaster to purchase necessities such as food, clothing, or medicine.
Annual Platoon Evaluations – The Department conducts timed tasks to measure performance with national standards on a regular basis. On December 7th, the “C” Shift Platoon, consisting of 18 personnel, practiced low-angle rope rescue operations (LARRO) to rescue a victim that had fallen down a hillside. The platoon successfully completed the drill in spite of several fire personnel called away to real emergencies in the City. The haul team was able to add additional mechanical advantage to account for the absence of these firefighters.

Culver City Winter Wonderland Camp – Winter Wonderland Camp is fast approaching. Week one, which runs December 19th through the 23rd, is full. Week two runs from December 26th through the 30th and has two available spaces. Camp costs $135 per week for Culver City residents and $166 per week for non-residents. For more information, contact the Recreation office at 310-253-6650.

Culver City After School Recreation Program (CCARP) – CCARP students are preparing for a well-deserved Holiday break. After school sites will be closed during the CCUSD winter break, December 19th through the 30th. Happy Holidays!
Parks Division – The Syd Kronenthal Park ages 2 to 5 Playground Project at the Day Care Center was completed and reopened to the public in early December. The new playground is 100% accessible and contains new and challenging play equipment designed for developing both a child’s physical and mental skills and capacities, as well as providing plenty of fun!

Culver City Senior Citizens Association (CCSCA) Member of the Year – Congratulations to Culver City Senior Citizens Association Member of the Year Carolyn Conway. Carolyn is a dedicated and cheerful CCSCA volunteer and is passionate about sharing her knowledge and experience. Her 50-plus years of volunteering include service in many aspects and many places and organizations, including: nursing homes, VA hospitals, Kaiser emergency room, camp counselor for disabled youth, Habitat for Humanity – and that’s just some of them! Since joining CCSCA over 8 years ago, Carolyn has volunteered for the Wednesday Work Project, the Culver City Fire Department, the Culver City Housing Authority, the SWAT (Someone With Available Time) Team. She also makes weekly phone calls to seniors who receive meals from our home-delivered meals program. Carolyn has served on the CCSCA Board of Directors for several years and as Vice President for the last two years. The Senior Center is fortunate to enjoy Carolyn’s selfless and tireless service. Thank you and congratulations, Carolyn!

Culver City Senior Citizens Association Membership – Membership enrollment for the Culver City Senior Citizens Association will be held the first two weeks of January 2017, from 9:00 am to 2:00 pm in the lobby of the Senior Center. Membership is open to all members of the community ages 50 and older. Fees for 2017 are $13 for membership, $5 per parking pass, and an additional $12 if you choose to have the monthly newsletter mailed to your home. Use of the fitness room is $125 per calendar year or $75 for six months. All fitness room memberships require a physician’s form for either new membership or renewing membership. Registration staff accept cash and checks only. No bills over $20 please.

Culver City Senior Center Seeks Volunteer Teacher – The Senior Center is looking for volunteer teachers for the new android phone and/or tablet class at the Culver City Senior Center. Our members have asked for this and we hope we can provide it. Classes are traditionally six weeks long for two hours per week, although one-time workshops or seminars would be beneficial as well. Volunteers should have knowledge of android phones and/or tablets and have teaching or public speaking experience. Key skills would be experience in how to break down and explain technology concepts in an easy-to-understand way. This is a great opportunity for students as well as anyone who wants to engage and empower our seniors about technology. If interested, please email your resume to volunteer specialist Jill Thomsen at [email protected]
The Senior Center Dietetic Program – On December 7th and December 15th, the Senior Center welcomed two dietetic program interns from Pepperdine University, who provided information on “Food Safety for Seniors” and “Holiday Eating and Recipes.” The interns were available for discussion and to answer questions with seniors. Thank you, Pepperdine University, for offering this partnership.
Culver City Senior & Social Services Marriage and Family Therapist – The Senior and Social Services Division welcomes therapist Valerie “Billie” Klayman as our new contract staff member. Billie is a Licensed Marriage & Family Therapist (MFT) available for community support. For many years, Billie served as a Senior Center volunteer through her work with Antioch University Counseling Center as a support group leader, drop-in counselor and MFT Intern. Now she is available at the Senior Center on Wednesdays and Fridays. For more information, call 310-253-6717.
Veterans Memorial Complex Rental Operation – New Mity Lite black, stackable chairs have arrived for the Veterans Memorial Building, replacing the used red folding chairs. The new chairs are suitable for conferences and banquet seating, as well as for audience and orchestra seating.
Police Department
Downtown Plaza Christmas Tree Lighting – On Thursday December 1st, members of the Culver City Police Department accompanied Santa Claus at the annual Christmas tree lighting event. Each year members of the Police Department bring Santa on his sleigh to the lighting event and greet members from the community. The Police Department also brings Santa around to Culver City neighborhoods.

Operator of the Year and Distinguished Operator of the Year – On December 7, 2016, Mayor Jim Clarke and Jacqueline Hamilton, Field Representative for Congressmember Karen Bass joined the Culver CityBus team in honoring the recipients of the Operator of the Year Award. Operators Jonathan Culbert and Steve Sanceri were each presented a Certificate of Recognition for their hard work from Congressmember Bass (presented by Ms. Hamilton) and Assembly Member Sebastian Ridley-Thomas (presented by Mayor Clarke). Both Operators were also honored for this distinction at the June 13, 2016 City Council meeting.