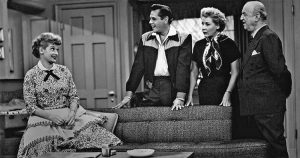 Somewhere in this world, right now, someone is watching an episode of I Love Lucy. There are only a few cultural phenomenon that have been this far reaching and this long lasting. Every hour of the day, somewhere in the world, someone is taking part in a Catholic Mass, someone is performing some version of Hamlet – and someone – someone with electricity and a tv set – is watching I Love Lucy.

It’s heresy, I know, but for many years – I did not love Lucy. I kinda hated it.

It was already in near-constant reruns when I was a child, and as part of our allotted hour of television per day, my sibs and I often watched an episode of I Love Lucy. While I’m certain I do not have to describe any of the basic elements of I Love Lucy, you know them by heart, but just for the sake of framing; a woman married to a musician involves her friends in her never ending crusade to have her husband see her as an equal. She fails. She loses. Every time.

Did we all see that?

And the moral of the story, at the end of every episode, is that she’ll never win. No matter that she can sing, dance, tell jokes, have a baby, cook dinner – There is an understanding among the other three characters that she’ll keep trying, but she will never win. And what the audience knows is that those other three characters are the ones who keep deciding that she loses.

I Love Lucy tries as hard as it can to make you laugh, and it does, but still it’s a tragedy.

I also thought – I always thought, since the time I was very small, that it was a terrible example. The four of them,  two couples, one man, one woman each – get through life in the most interesting city in the world, NYC in the late 1950’s – and spend their lives lying to each other, gossiping and scheming. Never happy, always carping.

And being constantly broadcast into wider tv markets, a decade after the origin of the series, you could find her on the airwaves anywhere that had reception.

At times, it seems the most constant lesson humanity has learned is that women want to sing in nightclubs – and even if they are very good, they must not be allowed to do that. As a woman who loves to sing, who still finds that – too often – my song sticks in my throat out of fear. Thinking women can win?  Sit down and watch another black and white half an hour of ‘no way, sister, just no way.’ And laugh about it.

On the upside, what Lucy did was make us visible – a world of smart, talented, ambitious women – longing for a place to really use their talents, and know that we were not alone.

Much wondering has gone into why Lucy and Ethel didn’t just team up and split, but women were not allowed to do that. Being real friends, true allies, was not permitted to that generation of women. It’s part of the “you can never win” scenario.

The despite the way that women have internalized the idea that we can never win, it simply isn’t true. It is a lie. But we have to be friends and allies and supporters. There are more women on this planet than men. We don’t need their permission to win. What we need is each other.

Consider the cultural evolution of our other biggest markers; the global repetition of the Mass tells us that were are miserable sinners, lucky to be given the chance to grovel and beg forgiveness for our alleged sins. When I attended a Mass (the funeral of a friend) after not attending for several decades, I was really shocked at how wretched the language was. It was so much a part of the atmosphere when I was a child, I did not have any way to question the concepts. Every hour of every day, billions of people are repeating these words. Telling themselves that they are hopeless sinners, fit only to beg for mercy.

Hamlet, while longer than the Mass and centuries younger, is another worldwide phenomenon of repetition.  It has taught us that at the end, everyone dies. No one doesn’t see that in Hamlet. Prince or servant, crazy or sane, man or woman, you die.

Lucy is in constant broadcast. and there are girls and women watching and maybe talking about what they would do. Or maybe remembering and confiding some personal defeat at the hands of the men in charge. And that does not even begin to take on the lessons so well learned, we dole them out to ourselves. And each other.

So, notice the sequence – from the beginnings of the Latin Mass in Europe, that particular intention has been broadcast around the world (or at least the Eurocentric ‘known world’ ) took more than a thousand years. Until Hamlet, and Hamlet did not even become internationally known, let alone staged constantly until the 1800’s, when Shakespeare was discovered again as ‘culture’.

I Love Lucy is only about hundred years after that.

Right now we have the ability to send a story around the world in minutes, at saturation level, and just now, it’s time for a new story.

The new story can be about power with instead of power over.  The letting go of constant quarreling, and replacing it with real peace. Lucy showed us, when it was socially and financially much harder, that women can own, write, produce, direct and star-in. You might even have heard that Lucy was the producer who okay’ed the pilot for Star Trek.

It seems I do love Lucy after all.