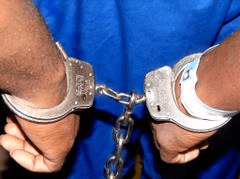 December 16, 2016  at approximately 1:00 p.m., Los Angeles County Sheriff’s Department Transit Policing Division Detectives arrested James A. Hanson, a 32 year old man from Culver City, California, for an assault that occurred at the Metro Hollywood/Vine Station platform. Transit deputies were made aware of the beating when a witness to the crime took a cell phone video and posted it to his Facebook page.

The Sheriff’s Transit Policing Division had originally received a call on the morning of Tuesday, December 13th, 2016, at approximately 1:00 a.m., reporting an assault at the Metro Station at the corner of Hollywood and Vine in the Hollywood area of Los Angeles. Deputies were quickly dispatched and arrived within minutes to the location. They did not find the Victim, Suspect, nor a witness that would speak to them. Believing that an assault had indeed occurred, LA City Fire Paramedics were also dispatched. They too checked the area and were unable to locate anyone.
All of the first responders cleared the scene as they were unable to locate any involved parties. Later in the day a news media outlet advised deputies that a video had been posted to social media. Deputies were able to make contact with the man who posted the video to his Facebook page and were able to ascertain that he was a witness to the assault. Transit Deputies continued to work closely with Metro to apprehend the suspect in this incident.

Several media outlets have aired the news story, prompting the victim of the crime to come forward. Transit deputies were able to take his report and had him transported to a local hospital for treatment of his injuries that he sustained during the attack. The media coverage also led to many tips regarding the possible identity of the suspect in this assault. Detectives followed up on these leads, including the one that led them to Hanson.

Hanson has admitted to his role in the assault and has been booked at the Sheriff’s Century Regional Detention Facility for violation of 245(a)(4) PC, Assault with a Deadly Weapon likely to produce Great Bodily Injury (hands and feet). He is being held in lieu of $50,000. Bail.

Hanson is scheduled to be arraigned on Monday or possibly Tuesday of next week. Transit Policing Detectives are continuing the investigation. If you have information about this incident you are encouraged to call the LA County Sheriff’s Department Transit Policing Division Detectives at (888) 950-SAFE.

Riding on Metro is safe and incidents like these are indeed rare. However, please remember, if you SEE SOMETHING that you believe is suspicious or a crime occurring, SAY SOMETHING by calling: (888) 950-SAFE (7233), or your local police department. You can also use the Transit Watch LA App, to report crime or advise of something or someone suspicious on the transit system. The App can be downloaded at the Apple App Store, or on Google Play for Android Devices. http://transitwatchla.org/ (remember though, calling is always best!!)

If you want to report crime or a law enforcement issue while riding Metro or Metrolink, please call the LASD Transit Policing Division at (888) 950-SAFE (7233), or if you wish to remain anonymous, you can call “LA Crime Stoppers” by dialing 800-222-TIPS (8477), use your smartphone by downloading the “P3 MOBILE APP” on Google play or the App Store, or by using the website http://lacrimestoppers.org