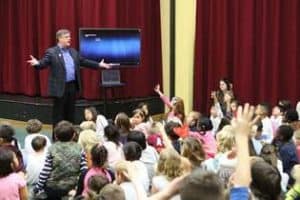 An early morning panel discussion can offer parents support on how to get children active and keep them moving for better physical and mental health. Allyson Felix, the most decorated U.S. woman in Olympic track and field history, and Culver City Centennial Screenland 5K weekly training session leader Rod Dixon, the Olympic bronze medalist who won the New York Marathon, will share their athletic experiences and offer thoughts on how adults can positively support children’s involvement in athletics at a free Sports Panel, Thursday, Dec. 15, from 8:30 to 9:30 a.m., at Screenland 5K Golden Wizard sponsor Turning Point School.

Friends of the Screenland 5K are invited to attend the free session, which will feature five star sports figures.

Culver City Mayor Jim Clarke visited the campus, last week, and discussed the city council’s goal to enhance Culver City’s reputation as a “city of kindness” as part of its recently adopted strategic plan. He asked students and faculty what they think it takes to get more youth involved in service around their communities.