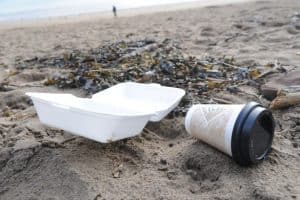 Polystyrene is still a topic for the city council and the discussion is returning on Dec, 12, 2016. The discussion of an enhanced proposal from Ballona Creek Renaissance to ban single-use polystyrene take-out food containers, food ware and coolers will be coming back to the agenda.

At the August meeting, there were 28 speaker cards submitted by people who wanted to address the Council on this issue. Presentations began with the staff report, delivered by Joe Susca who offered that despite best efforts, the City of Los Angeles’ polystyrene recycling program is not working, because there is no market for the stuff, especially if it is soiled with food waste (specifically oils). The City of Los Angeles will not accept any agreement with the City of Culver City regarding this issue.

Individuals who had submitted cards to speak before the council were four representatives of the plastics and/or restaurant industry who were opposed to a complete ban; four speakers who were generally in favor of a ban, but wanted further study, and/or an exception for utensils. The other 23 speakers mostly identified themselves with Ballona Creek Renaissance (BCR), the Culver City Community Coalition, and/or one of the environmental defense organizations represented at the meeting (Surfrider, Sierra Club, 5Gyres).

That meeting remanded the topic back to the Sustainability Subcommittee.

The most recent staff report will be available for viewing from the City’s website on or after December 7, 2016 at www.culvercity.org/agendas or at the Julian Dixon Library, 4975 Overland Avenue, Culver City.