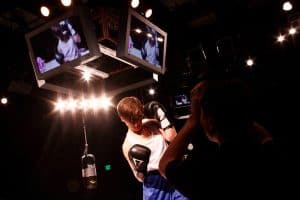 The solo show The Wholehearted will take over the Kirk Douglas Theater from Dec. 2 to Dec.11. It’s written and co-directed by Deborah Stein and performed and co-directed by Suli Holum, with original songs by Obie-winning composer and sound designer James Sugg. Produced  in association with the La Jolla Playhouse, the play is set in a boxing gym where female boxing phenom Dee Crosby is preparing for a whole new fight.

Preview December 2 at 8 p.m. Opens December 3 at 8 p.m.
Through December 11.
Regular Performances: (December 4 – 11)
Tuesday through Friday at 8 p.m.; Saturday at 2 and 8 p.m.;
Sunday at 1 and 6:30 p.m. No Monday performances.
Exceptions: No 2 p.m. performance on Saturday, December 3.
Written and Co-Directed by Deborah Stein
Performed and Co-Directed by Suli Holum
Produced in association with La Jolla Playhouse
A World Premiere Production
A DouglasPlus Production