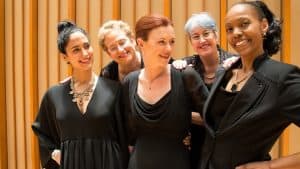 This Saturday November 19, Culver City’s choral powerhouse Vox Femina will celebrate twenty years of uplifting public performances and magical recordings with a concert at the Colburn School, in Zipper Hall at 8 pm.

The chorus was founded in January 1997 by Dr. Iris S. Levine and Stacey L. Poston. When the 21 founding members of Vox Femina Los Angeles (Vox) first appeared on stage as guest artists with the Gay Men’s Chorus of Los Angeles (GMCLA) in April 1997, their much-heralded debut added a sparkling new dimension to the cultural life of the greater Los Angeles metropolitan region.

Since that time, Vox has quickly established itself as one of the premier women’s choruses in the United States with a demonstrated ability to perform highly eclectic repertoire. It has actively fulfilled its mission through an aggressive schedule of performances, touring and educational outreach. Vox has demonstrated its support and encouragement of living composers through commissioning new works.

Vox Femina Los Angeles gives women voice through the performance of quality choral literature. Diverse in culture, age, race, belief and sexual identity, we are a chorus committed to commissioning new works and raising awareness about issues that affect us as a family of women. Through music, we aim to create a world that affirms the worth and dignity of every person.

For tickets, please go to voxfemina.org/subscriptions/