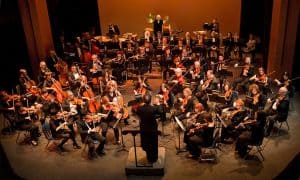 The Los Angeles Doctors Symphony Orchestra is excited to announce its first collaboration with the Orange County Friendship Choir to open its 64th consecutive season with an ambitious production of Johannes Brahms’s Ein deutsches Requiem. Featuring approximately 150 musicians and chorus members, with soprano Keiko Takeshita and baritone David Castillo, this glorious production promises to be a memorable event for our audiences.

THE ORANGE COUNTY FRIENDSHIP CHOIR, founded in 2009 and based in Irvine, has performed a wide variety of the world’s opera choruses, Mozart’s Requiem, and various popular songs at their concerts and at various cultural and charity events in greater Los Angeles. The Choir performed Beethoven’s Symphony No. (“Ode to Joy”) at Walt Disney Concert Hall. Keiko Takeshita, Artistic Director of the Choir and our soprano for this performance, received her Bachelor and Master of Music degrees from Aichi Prefecture University of Arts in Japan. She performs extensively throughout Los Angeles County, Orange County, and Japan. Baritone David Castillo has performed with the Los Angeles Philharmonic Orchestra, the Los Angeles Master Chorale at Walt Disney Concert Hall, the Los Angeles Opera, and the Cleveland Orchestra in a variety of works that range from baroque to experimental.

THE LOS ANGELES DOCTORS SYMPHONY ORCHESTRA, now in its 64th season, led by Maestro Ivan Shulman who begins his 27th consecutive season as Music Director, is one of the oldest community orchestras in the United States. Its mission is to provide enrichment of the communities in which we play through the healing power of music, to support medical causes, and to partner with groups such as the Westside Music Foundation and the Harmony Project that support young musicians in their pursuit of the discipline and joys found in musical expression.