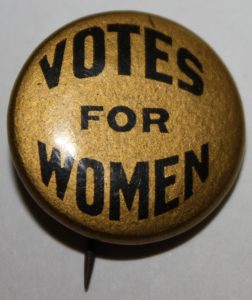 I recognized just yesterday what I was feeling – the slightly dizzy, somewhat queasy sense of being overwhelmed. The desire to discuss was blocked by the anxiety of knowing I was not ready for a confrontation. If someone disagreed, if someone wanted to argue, I was not up for it. I’d cringe, I’d crumble, I’d cry.

I did none of those things. I worked, I taught, I cooked. I ran, I did a lot of yoga. When I’m anxious, getting some exercise helps. I talked to my daughters about this moment in history and what it means to me.

It is not enough to have the right to hold office in the abstract. Office must be held.

I have not been this fearful of a national political decision since the Anita Hill hearings, which was when I started writing as a local journalist, way back in the 20th century. Opinion pieces are – too often, I think – simply a way of reinforcing the status quo. But when women speak up about discrimination, about sexual violence, about pay inequity, we are breaking that status quo, and opening the door to real freedom.

The piece that I published about the Anita Hill hearings also gave me my first experience of hearing people discussing my writing in public. I was standing in line to be seated at a cafe, and the couple in front of me had a copy of the paper in their hands, and were discussing, and then arguing, over the points I had raised. As the conversation got louder and more heated, I decided I wasn’t that hungry, and I left. But if someone had asked me – did you write this? I would have said yes, and with pride.  Happily, no one asked.

The irony of it – having an example of how powerful my words could be, and at the same time not wanting to be confronted over my statements – was not lost on me. I try to forgive myself.  I was raised to be a woman, and I don’t go looking for confrontation ( It does tend to come looking for me…)

This past week, watching the PBS documentary series on “The Contenders” profiling people who have run for office, I was really struck by the episode on Geraldine Ferraro and Sarah Palin – two women who were both Vice Presidential picks on major party tickets.  The media tilt was cartoonish. While Ferraro was scolded over her husband’s taxes, Palin was simply discussed like a fashion model, everything about her clothes, her hair, the price of her shoes. In a few short decades, a woman running for Veep had been reduced to a doll.

Because if a woman were to hold office at that level, the power brokers need to remind you not to take her seriously.

Men – particularly men in power – have not had our experiences of being intimidated, of being physically threatened and emotionally abused. They were not victimized as children, marginalized in education and business, and left helpless while laws were passed about their health care choices.

Trying to share what this election means is challenging. I made a decision years ago that I was not writing for 50% of the audience.  This is not about revenge or justice. There is no justice, there’s just us, and we need to be in this together. Feminism is not man hating. Feminism is the radical idea that women are people. People with rights.

Because having the right on paper, and having the actual right are two different things.

I’m putting on my suffragette whites and going exercise my right to vote for a woman I have long admired. That I know so many others who are doing so is a great feeling. Later tonight, if I am crying in happiness or sorrow, I know I’m not alone.

My rights always feel better after they get some exercise.