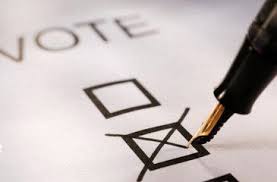 Just as we do on every election day, we are offering you the chance to catch up on your homework, and fill out your ballot with ease. Yes, we are telling you who and what to vote for – and if past elections are a good measure, lots and lots of you appreciate the advice. If you have already voted, thank you. The object of the game here is to get people to vote. On all of it. Yes, even the judges that you don’t know, even the local measures you feel conflicted over.

I have to offer my deepest thanks to Dan O’Brien for covering the California, LA County and Culver City Measures over the past month in a way that gave our readers a chance to weigh the language and the untangle the knots. If you have not read them yet, use the search bar and call them up; there is still time to do your homework. If you just need to copy my homework, I’m happy to have the Hermione Granger desk. As herself would say, just turn it in on time.

Senator Kamala Harris. I don’t dislike Sanchez, I just like Harris more. I see her working with Feinstein in ways that will truly benefit the state.

Congresswoman Karen Bass.  She does not really need your vote, but I’m sure she’d appreciate it anyway.

Do not vote for Sebastian Ridley-Thomas. He doesn’t need it, and he does not deserve your support.

JUDGES – We source our recommendations for judges from three different people (whom we feel are knowledgable on the topic) and tend to find at least two agreements on who to vote for. Go ahead – judge.

Editor’s Note – Office 42 had another recommended judge on our initial publication, but that candidate did not make the final rounds. Sometimes there is a DISadvantage to doing your homework too early. Thanks to all the rss feed readers who pointed out our error yesterday.

THE PROPS – and we’ve got a lot of them. Do you know why? The electorate of the previous election determines the number of signatures needed to get a prop on the ballot. So few of us showed up to re-elect Governor Brown, getting propositions on the ballot was like shooting hoops into a trash can an arm’s length away. So, very long ballot and lots of contradictions. Here is the easy way out.

Prop 51 – Vote yes. Lots of schools need repairs, and nothing is a better investment than education.

Prop 53 – Vote No. do you want a ballot this long or longer every time the state wants to raise money for a project?

Prop 54 – Vote yes, for heaven’s sake. Let’s have some accountability from these weasels who wait until the bill is on the way to get voted and signed, and then add in their little personal riders. They are our laws, let’s have some transparency.

Prop 55 – Vote yes. Remember all the budget cuts? This is the money that got those line items back. If this one loses, we go back to budget cuts.

Prop 56 – Vote yes. The more expensive cigarettes are, the fewer kids will smoke them. And we can use the revenue.

Prop 57 – Vote no. While I am totally willing to let non-violent offenders out for early parole, I’m horrified to know that domestic violence, and in many cases rape, are not considered violent crimes.  (Who writes these laws? Wife beaters? Rapists? Bad hombres?)

Prop 58 – Vote si. Vote hai. Vote yes. I don’t think I need to explain this one to Culver City. The obvious benefit of educating children in languages other than (and including) English is just basic good sense. Gracias.

Prop 59 – Vote yes but know that it’s an empty gesture. The electorate of the state of California has no authority to overturn a Supreme Court decision. You can also vote for chocolate ice cream and see if any shows up.

Prop 61 – Vote yes. The dumpsters full of money that have been spent on advertising have to have tipped you off to who is picking up the check on this horse race. Big Pharma does not want any price controls anywhere. Having a very reasonable one in the state of California could lead other states to legislate the price of drugs, saving millions of lives and preventing billions in obscene profits. You are not hurting veterans. You are helping everyone.

Prop 62 – Vote yes. The State should not have the right to take someone’s life. Ever.

Prop 63 – Vote yes. Let’s make ‘mass shooting’ a phrase for the history books and not the headlines.

Prop 64 – Vote yes. The prohibition of marijuana is a law so unevenly applied, it’s racism live and in person. If you look at the percentage of young African Americans who are incarcerated for a crime that white kids get away with 24/7/365, you’d think the math was wrong. It’s not wrong – it’s tragic. Industrial side – if we grow enough hemp we can save the planet. Colorado, Oregon and Washington bring in billions on their marijuana taxes. AND this kicks the slats out of several Mexican drug cartels, so less pain for our friends in the south.

Prop 65 – Vote no. The plastic industry must have hired a gaming consultant on this one. To find language this confusing, you’d have to look at an insurance rider for a circus orchestra planning international travel.

Prop 67 – Vote yes. We do not need plastic bags making a come-back. Maintain the bag ban.

Okay, Ready? These are the County Measures

Measure A – Yes. Parks are good, and we need them.

Measure M – Yes Public Transportation is good and we need lots more. This is the small item that could create truly big changes for Los Angeles – the city that has you surrounded.

Community College District – Measure CC – Vote Yes Now I know that money raised for the community colleges has been absurdly abused in the past. But it is no longer the College Presidents (many of who were arrogant to the point of being delusional – anyone recall Mark Rocha?) who are making decisions, it’s the district. Give ’em the money.

And – at last- Culver City Measures

Measure CA – Vote yes.  Direct democracy is not always the answer (Brexit, anyone?)

Measure CB – Vote yes. It probably won’t ever happen again, but let’s make damn sure of it.

Measure CD – Vote yes. Every meeting of every organization you’ve ever attended has taken hours out of your life. It took time and money to prepare, it took effort and scheduling – and then, more often than you’d like to admit, turned out to be absolutely unnecessary. If we pass this, it lets the council decide if meetings are needed. Fewer meetings? Saves the city money, time, effort and leaves you with more hours to live your life.

Measure CW – Vote yes. I know there’s a lot of kick back on this one, but the bottom line is that we have to pay for these water projects, and without creating more income, we have to take it out of the general fund. By putting up some funding, we are eligible for matching funds and federal grants and things like that. If we have nothing to add to the pot, then it’s a far bigger problem, and it’s all ours. You like federal money paying for infrastructure. You like clean water. Vote yes.

Congratulations! You are all ready to turn in your homework. Now, save this on your phone in case you forget your sample ballot, and get yourself to your polling place. Let’s have a record breaking turnout, and a big blue landslide.