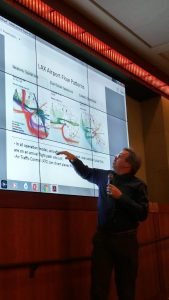 Mayor Jim Clarke has vowed to fight the Federal Aviation Administration over a new air traffic control system that would condense flights into small windows, increasing noise and pollution levels for those living below, like the citizens of Culver City. At a meeting on Thursday Oct. 20, 2016 at City Hall to address the issue of flight noise and airport expansion, Clarke spoke to the frustration on the ground and the lack of response from the federal agency.  His reaction stemmed from the FAA’s Environmental Assessment Report, which declared the system, nicknamed NextGen, would have no significant impact on Culver City.
“The FAA totally ignored the impacts to our community,” said former Culver City mayor Paul Jacobs in the Public Comments section of the LAX Subcommittee Thursday night. Despite complaints, statements, meetings, letters and other actions to get the FAA to address citizen complaints of louder air traffic, “Nothing has worked,” he said. “You can’t get a mule to move without a two-by-four. We must take legal action.”

Culver City is in the So Cal Metroplex stretching from Santa Barbara to Mexico. The FAA has been testing flight patterns for years to come up with faster, and so cheaper for the airlines, vectors. Culver citizens have been complaining about more noise and pollution levels since 2012. This latest refusal to address their environmental impact concerns produced applause from the 40 people present at Jacobs’ comments.

“Noise and health concerns are not in the mandate of the FAA,” said Jacqueline Hamilton, Field Representative for Congresswoman Karen Bass. “We have to call attention to this, to see what we can do.”

Special counsel to the City Barbara Lichman said suing the FAA would be difficult, but “a loss could be as effective as a win in this case,” she said. “The issue would become public.”

Stephen Murray, city representative on the LAX Community Noise Roundtable, (pictured above)  said air traffic is booming, particularly from Asia, particularly cargo planes bringing products to the American market on aging, noisy aircraft. Those fly into LAX, and their route would be over Culver City.

Clarke said the flights should be disbursed over a wide area to distribute the impact, not concentrated over designated areas.
“We may be small, but we’re known as leaders,” he said. “We will be like the mouse that roared.”

The issue will be addressed at the City Council tonight at 7 p.m. in the Council Chambers at City Hall and is televised live on Channel 35, or online at www.culvercity.org.