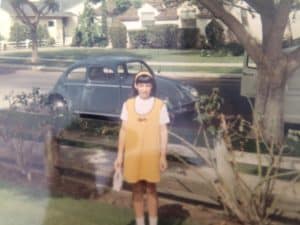 Message in a Bottle…Ruth’s Truths Returns —

I sat crying out loud, in my garage. I was rummaging through boxes, making a clearing of both physical and emotional space. The things I store in my garage are artifacts from not only my life, but that of both parents, and even grandparents, all now passed. My father was the most recent one to depart, June 2009. What caused the outpouring of tears was a handwritten letter I discovered, from my mom to me, dated May 20th 1986. She was dead ten months later.

More than just a nice thing to have found after all these years, the letter contained several passages that could practically stand alone as themes for Ruth’s Truths essays. My mother wrote to me regularly, and we spoke on the phone once a week, over the course of the six short years from the time I set off for Japan in early 1981, to her death from lymphoma in early 1987.

First, my mom writes about her beloved Las Vegas. During this second year of her illness, she was wearing a wig and was on and off prednisone. She wrote about how she was avoiding seeing people she knew in Vegas. Just when I was wondering why, she wrote that she didn’t want to see anyone because of how she looked: “fat” (even though she’d lost 20 pounds), and with a round face (“the wig makes me look bigger instead of short hair close to my face”). She wrote, “I have many memories here. I used to be a healthy poor woman. Now I am a sick affluent woman.” The early 80’s had been good times. My dad took some new career opportunities, including an expatriate stint in Europe in his 50’s, after having spent twenty-six years at the same company, where he never sought out the executive track – he liked being a programmer. I guess his accomplishments made my mother feel “affluent.”

Next, Mom wrote about the prospect of my sister visiting me in Tokyo. After calling herself affluent, she pointed out that the exchange rate weakened the dollar (it did), and that I would be expected to pay for my sister’s daily expenses, but that my dad would cover the plane ticket. She mentioned that my sister and I would be going to Hong Kong together; I had not even remembered that trip, until my sister corroborated it recently. What I do recall is that my mom had a dream of going to Hong Kong, but never got the chance after she took ill. We’d made plans to go there together, but mom never followed through with her reservation. I kept calling Pan Am’s Tokyo number, trying to find her booking, to no avail. So I called home, and was told the good news and the bad news: “the bad news is that I have cancer, the good news is that they say it’s the curable kind.” Yeah, right. Two years later she was gone. Even when Jackie O contracted the same strain of cancer years later, the best doctors and all the money in the world couldn’t cure her either.

Later in the letter, Mom thanked my then husband and I for a Mother’s Day card we apparently had sent. Eerily, that would have been the last one I ever sent her. She died a month after her 55th birthday – the theme under which I started writing Ruth’s Truths in the first place in advance of my own 55th year. I’d often wondered how we celebrated my mother’s 50th birthday, which would have been in 1982. As I write this sentence, I realize that our celebration must have been our first trip to Israel! My mother summoned me from Japan to meet the family in Italy. From there, we joined a “holy land” tour. My father stayed behind for whatever reason, and he never made it to Israel. He oddly had no desire to ever go, despite his avid interest in history, and I realize now that I never got to ask him why. For my mom, it proved to be her first and last trip there. I didn’t go back myself until 2012, and now have set a goal to go once every two years; I’ll be there this December.

Perhaps the saddest page of the letter to read was the last page; re-reading it later in the day at my sister’s house, tears were shed a afresh by us both. She wrote,

“My car is the Sedan de Ville. All white with garnet leather inside and a garnet painted line on the outside across. The smell of leather in the car is great. I love it, love it, love it; so does Daddy. Can’t believe I have it. I may even let you drive it, altho’ nobody else has except Daddy, and he doesn’t much. It’s mine. And I feel important driving it. It makes me feel good.”

My mother always dreamed of owning a Cadillac, but when my father had the chance to please her, he instead bought a Mercedes Benz for himself, upgrading first car he ever owned: a used Volkswagen bug. Mom ultimately got her dream car; he traded in the Mercedes for the Cadillac as she lay on her deathbed. According to my sister, the car sat in the driveway most of the time. When I finally came back to live in LA a year after she died, dad offered me a choice: take their old Chevy Caprice beater for free, or pay off the Cadillac. I didn’t see myself in either car for long, and I couldn’t even bear to look at my mom’s beloved Cadillac, so I took the Caprice, and he sold the Cadillac. I drove around that hulking green Caprice with the broken front seat for a little while, until I bought me a cute, red, Toyota SR5 “Levin” coupe, to kick off the new life I’d begun back in America.