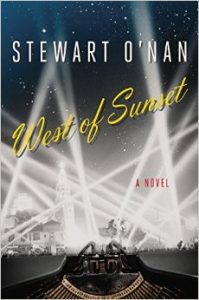 Join us at the library on Saturday morning, October 15 for the culmination of the One Book, One City Centennial Celebration!

Stewart O’Nan, author of West of Sunset, will be speaking at 10:30 in the northwest reading room at the Culver City Julian Dixon Library. He will be happy to sign books at the conclusion of his talk, but he must leave by noon.

From Caryn James of the New York Times – In “West of Sunset,” Stewart O’Nan takes the risky approach of imagining those fraught years from Fitzgerald’s point of view. The novel follows him from his arrival in 1937, with a lucrative contract at MGM, through his death from a heart attack, worn out at 44. O’Nan hits the predictable high points. Fitzgerald socializes with pals like Humphrey Bogart, Ernest Hemingway and Dorothy Parker, who comes spouting witticisms. He has an intense love affair with the young, blond gossip columnist Sheilah Graham, who pretends to be from the English upper class but was born Lily Sheil in a London slum. She puts up with his out-of-control drinking, nurses him after an angina attack and temporarily leaves him after a knock-down-drag-out fight. Throughout, Fitzgerald tries to juggle soul-draining studio writing with what would become “The Last Tycoon.”

There will also be a mini book sale both before the talk and during the reception that will follow his talk.