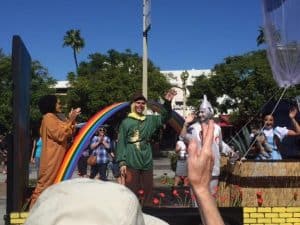 With more than 1000 people walking, 80 plus organizations taking part, and Parade Organizer Laura Chardiet wielding a cell phone and a clipboard, the Culver City Centennial Kick-Off Parade was guaranteed to be a gorgeous, memorable funfest and it succeeded on every level. The ceremonial speeches and the downtown block party that followed created a holiday that never existed before and may have to become a regular point on the calendar. September 24th may come around again, but we won’t see another one quite like September 24th, 2016.

The official opening day of the year-long Centennial Celebration drew a sizable crowd of spectators, and fantastic and funny color commentary at both ends of the route. Elaine and Howard Behnken held down the west end near the beginning of the parade, and Mike Cohen and Maren Neufeld at the east end by City Hall ( photo below right.) 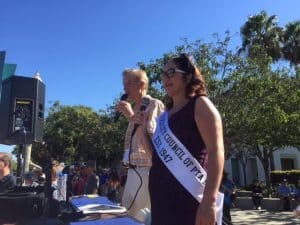 Foxes and La Ballona Lions all marched in proud and happy crowds, with the CCMS Panthers leading a large purple paw print, and the ASB of the high school almost at the end with a “Wizard of Oz” float (above left.) Clubs marched, with the Culver City Garden Club, Rock & Mineral Club, and Democratic Club walking Culver Boulevard with the Exchange Club, Rotary, and District PTA. But you didn’t need a club charter to parade – the famous downtown neighborhood “Happy Hour” hosted a float with performers saluting the speakeasy past, (below left) and DeeLightful Theater kids sang show tunes while sporting rainbow colored shirts and balloons.

Days later, Mayor Jim Clarke offered “I’m still walking about three feet off the ground, and I’ve got a smile that just barely fits on my face.” In his comments to the crowd at the Opening Ceremonies, on Sept. 24 Clarke asked “How much of Culver City would Harry Culver be able to recognize?” While landmarks like the Culver Hotel and Culver Studios would ring a bell, the growth and infrastructure might surpass even Culver’s most ambitious expectations. 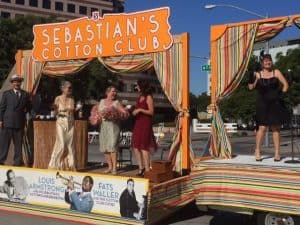 A ‘VIP’ luncheon was hosted at the Culver Hotel for city officials and visiting Sister City dignitaries, with City Council member Meghan Sahli-Wells singing “Pennies from Heaven’ to open the festivities.

The “Taste of Culver City” fed the crowds small bites of every kind from Tub’s Chili to Essential Chocolate Desserts. The Talent Show that had performers posted all over the plaza and the streets awarded top honors to the Culver City Symphony.

The wisdom of the Centennial Planning Committee moved the Centennial Gala evening over a week to Oct. 1st at Sony Studios, leaving everyone to finish the afternoon party and head home to rest.

While there will be many other events and celebrations through the year heading up to September of 2017, Culver City certainly began the Centennial on the right foot, with a parade that showcased so much of what makes this little slice of Southern California so special, so historical, and such a good place to live.