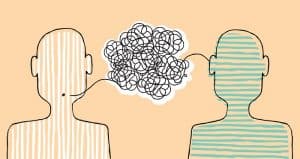 I’m awoken from a dream where I was the passenger in the vehicle showing my friend a hotel in a quaint village. I tell her, “Go left.” She hesitates, doesn’t go left. I say, “Go left! What happened? Why didn’t you go left?” And she looks at me and says, “You mean left TURN? Why didn’t you say TURN?” As I am feeling totally crazed in the dream, I am fortunately woken up by my alarm.

However I’m still pissed off. And it was a dream.

Brene Brown says “Blame is the discharge of anxiety.” Even in my dream, my friend is a nervous driver and hesitates as she’s driving, to go left. Then it becomes my fault.

I realized I had forgotten Brene’s wise words and I need to go back to saying “Blame is the discharge of anxiety.” When I was saying those words with regularity, I found myself stopping my own faulty communication blame. There was less, “Oh you know what I mean,” coming out of my mouth, since clearly the other person did not.

Eric Berne’s famous psychology book, published in 1964, Games People Play, described functional and dysfunctional social interactions. I was taught at a very early age, by my therapist parents, about the game, “Playing Dumb.” As it was described to me, this is when a person has the understanding and knowledge and yet they “play dumb” as a device to seek attention. By the way, ALL psychological games are unconscious. We had someone in my family who my mother insisted played this game all the time. I learned to recognized the behavior quickly.

Moving forward 40 years, I also recognize it in other adults, who claim that they are verifying information when they restate the question. Like saying to me in my dream, “Left TURN?”

However, with my knowledge of Autism and ADHD spectrums, communication difficulties are widened into a larger scope of possibility. People with Autism often struggle to understand the other’s point of view. So they are often coached to “check it out” regarding information. This might be to repeat exactly what was stated as if they hadn’t heard, which in their minds is simply to VERIFY the information to make sure that both parties understand the same thing.

And if the Autistic person has any inkling that they have gotten the information wrong, they might not check it out, but instead avoid it by pretending the request or communication never happened. It’s simply too overwhelming to try and figure out what the other person wants, needs, etc, so they simply avoid the interaction, as if nothing was ever said. One of my family members says, “It’s just safer that way.”

-With my own ADHD, I get frustrated when someone doesn’t get what I’m saying. If they have to repeat what I’ve said, I’m thinking, “Yeah, okay. Can’t you get what I’m saying?” in a sort of agitated headspace. I’m on such hyper-mode, that I’m irritated when I’m not understood. My anxiety increases, and then I get mad. And I blame. And then I blame to “discharge of anxiety.”

I also recognize that other’s communication style is perhaps not my problem? Wow this is weird. That if someone doesn’t understand me, it could be me. But it could be them. And if I can slow down enough to recognize that fact, I can make better choices in my response.

Meditation practice has honestly been one of the best things I have done to slow myself down. I’ve had a practice of some sort for many years, and I recognize my ability now to stop my irritation mid-sentence even, take a breath, back off, regroup and try something else. Sometimes I even say, “I’m sorry.”

In the end all I can do is be responsible for my own responses. I cannot change anyone else. But I can decide how I want to practice communication openly without blame. Communication is a practice. Don’t believe you’ve got it all right. You don’t. It’s messy. It’s hard.