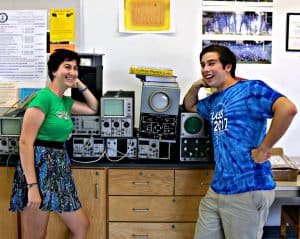 Culver City High School’s Simon Johnson and Rebecca Mirvish may have recently been named among the country’s 16,000 National Merit Scholarship semifinalists, but they both credit the one-of-a-kind education they have received in the arts for helping them achieve what else than one percent of high school seniors have.

“CCHS has a great arts program, which is extremely special,” said Mirvish, who has been a part of the school’s Academy of Visual and Performing Arts since her freshman year. “It is productive, allows me to be with friends and have opportunities for real-life hands-on experience. This is a great outlet for students like myself who are not good at sports.”

Heavily involved in theatre as a Tech major, Rebecca focuses on doing technical theatre rather than acting and performing. She is currently stage managing the play “Almost, Maine” and serves as secretary of Drama Council. Rebecca plans to go to college as a math major and has been involved in a wide array of activities at CCHS, including ASB Ambassador of the Arts, Math Chiron, founder of the “Friends for Now” Club and a member of both Mock Trial and the Student on Unbiased Politics (SOUP) Club. Off campus, Rebecca is involved with Temple Akiba’s youth group.
Like Rebecca, Simon has been involved in AVPA since he arrived at CCHS, both performing and working on the technical side of productions, where he has served on the lighting crew and master electrician. He has earned a number of awards from California Educators of the Theater Arts and currently serves as the AVPA Company Manager, making sure everything runs smoothly in theatre company and doing all the behind the scenes work that makes a theatre company run smoothly. The former CCUSD Spelling Bee Champion has also spent four years as part of the school’s Improv team and serves as this year’s co-captain.
“CCHS has been incredibly helpful both in academics and having great teachers,” Simon said. “The Arts program is HUGE! 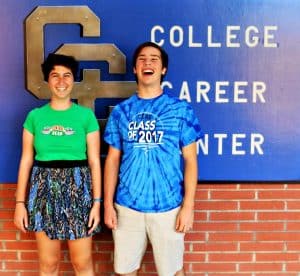 These programs have been really transformative for me and my identity. Doing Improv since middle school transformed me from being a shy introvert to a confident extrovert – the person who I am today.”

Simon is involved in in Model Legislature and Court, an extension of Youth and Government at the Culver Palms Family YMCA, and is a Math Chiron and Academic Mentor this year. He hopes to pursue a college career as a mechanical engineering and/or computer science major and has taken and scored 5s on numerous Advanced Placement (AP) classes.

“Our school has provided a lot of advantages that I wouldn’t have otherwise,” Simon said. “The quality of education and life at CCHS is greater than anything you can pay for at a private school.”

Rebecca and Simon hope to be among the 15,000 students to advance to the finalist level in February. About half of those students will earn National Merit Scholarships worth about $33 million next spring.