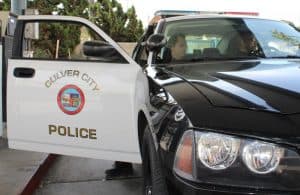 On September 10th at approximately 11:00 am, officers from the Culver City Police Department attempted to stop a vehicle with no license plates. In an apparent attempt to elude the officers, the suspect vehicle, which was later found to be stolen, accelerated through the intersection of Washington Blvd. and La Cienega Blvd. against a red light, colliding with another vehicle. One occupant of the other vehicle died at the scene and another was transported to a local hospital with non-life-threatening injuries. The officers were not involved in the accident.

The driver of the stolen vehicle and three other occupants fled the scene of the accident on foot. All four were quickly taken into custody and transported to local hospitals with non-life-threatening injuries; which were sustained in the traffic accident. The traffic collision investigation is being handled by the California Highway Patrol.

Today, Culver City Police Department Detectives met with the Los Angeles County District Attorney’s Office and obtained two felony criminal filings against the driver of the suspect vehicle: one for vehicular manslaughter and another for evading a peace officer. The seventeen year old female juvenile driver of the suspect vehicle was unlicensed and has a criminal history.