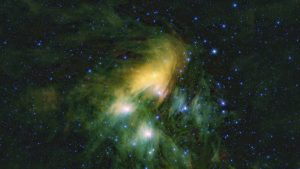 Like cosmic ballet dancers, the stars of the Pleiades cluster are spinning. But these celestial dancers are all twirling at different speeds. Astronomers have long wondered what determines the rotation rates of these stars.

By watching these stellar dancers, NASA’s Kepler space telescope has helped amass the most complete catalog of rotation periods for stars in a cluster. This information can help astronomers gain insight into where and how planets form around these stars, and how such stars evolve.

“We hope that by comparing our results to other star clusters, we will learn more about the relationship between a star’s mass, its age, and even the history of its solar system,” said Luisa Rebull, a research scientist at the Infrared Processing and Analysis Center at Caltech in Pasadena, California. She is the lead author of two new papers and a co-author on a third paper about these findings, all being published in the Astronomical Journal.

The Pleiades star cluster is one of the closest and most easily seen star clusters, residing just 445 light-years away from Earth, on average. At about 125 million years old, these stars—known individually as Pleiads—have reached stellar “young adulthood.” In this stage of their lives, the stars are likely spinning the fastest they ever will.

As a typical star moves further along into adulthood, it loses some zip due to the copious emission of charged particles known as a stellar wind (in our solar system, we call this the solar wind). The charged particles are carried along the star’s magnetic fields, which overall exerts a braking effect on the rotation rate of the star.

Rebull and colleagues sought to delve deeper into these dynamics of stellar spin with Kepler. Given its field of view on the sky, Kepler observed approximately 1,000 stellar members of the Pleiades.

Kepler measurements of starlight infer the spin rate of a star by picking up small changes in its brightness. These changes result from “starspots” which, like the more-familiar sunspots on our Sun, form when magnetic field concentrations prevent the normal release of energy at a star’s surface. The affected regions become cooler than their surroundings and appear dark in comparison.

As stars rotate, their starspots come in and out of Kepler’s view, offering a way to determine spin rate. Unlike the tiny, sunspot blemishes on our middle-aged Sun, starspots can be gargantuan in stars as young as those in the Pleiades because stellar youth is associated with greater turbulence and magnetic activity. These starspots trigger larger brightness decreases, and make spin rate measurements easier to obtain.

During its observations of the Pleiades, a clear pattern emerged in the data: More massive stars tended to rotate slowly, while less massive stars tended to rotate rapidly. The big-and-slow stars’ periods ranged from one to as many as 11 Earth days. Many low-mass stars, however, took less than a day to complete a pirouette. (For comparison, our sedate Sun rotates just once every 26 days.)

FUN FACT. The Japanese word for Pleiades is “Subaru.” Sound familiar? That six-star emblem on all Subaru cars is none other than a stylized version of the Pleiades cluster, as seen with the naked eye, binoculars, or a low-power telescope.