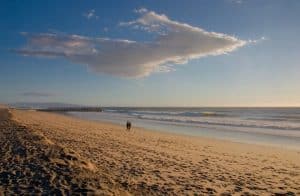 On Saturday, September 17, from 9  to noon, The Bay Foundation (TBF) will host its 12th Annual Coastal Cleanup Day event. TBF is returning to the dunes between LAX and El Segundo beaches, also known as the LAX Dunes, to remove invasive species of plants. These invasives take space away space from healthy and native species of plants, much as trash invades our beaches, parks and streets. TBF will once again partner with Friends of LAX Dunes (FOLD) to help restore Los Angeles County’s largest remaining dune system. Registration is now open and filling up fast.

CCD is an international event with over 90 countries around the world participating, making it one of the largest volunteer efforts on the planet. California CCD began in 1985—following the first such event in Oregon in 1984—to combat the increasing marine debris along our shorelines, and is coordinated in Los Angeles County by Heal the Bay in conjunction with the California Coastal Commission (statewide) and the Los Angeles County Department of Beaches & Harbors.

“I love working at the LAX Dunes,” says Tom Ford, TBF Executive Director. “It’s the largest expanse of coastal dunes that remains in Southern California, so the potential for the restoration work is huge. And people really get a thrill out of working on the dunes with its spectacular view of the Bay. It’s always a rewarding day.”

CCD coincides once again with the launch of National Estuaries Week (NEW), which celebrates beaches and estuaries—the vibrant coastal areas where rivers meet the sea. TBF, as a member of the EPA’s National Estuaries Program, helps educate about the connection between the watersheds that feed, or drain into, the Santa Monica Bay. TBF encourages everyone to take part in the national #EstuariesWeek social media campaign during that week, starting with pictures of their participation in CCD on Sept. 17, and continuing through Sept. 24.

NEW is the nation’s largest volunteer event for estuaries in our country, and this year marks the 28th anniversary of the first National Estuaries Day in 1988. More than a quarter century later, we now have even more evidence that estuarine ecosystems serve as natural barriers to buffer against storms and floods, absorb and store carbon, and provide critical habitat for commercial and recreational fisheries.

For 2016, NEW continues to focus on the connections between our estuaries and our economy. With growing concern about our nation’s financial health, it is important to recognize the value that protecting and restoring our estuaries delivers to our national economy. In fact, coastal counties provide more than half the nation’s gross domestic product and support more than 69 million jobs—that’s about 40% of U.S. employment!

TBF’s Coastal Cleanup Day will be funded by a grant from the State Coastal Conservancy.