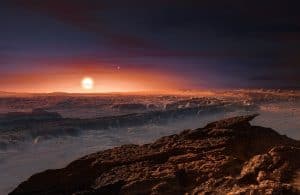 Astronomers have found clear evidence of a planet orbiting the closest star to Earth, Proxima Centauri. The long-sought world, designated Proxima b, orbits its cool red parent star every 11 days and has a temperature suitable for liquid water to exist on its surface. This rocky world is a little more massive than the Earth and is the closest exoplanet to us—and it may also be the closest possible abode for life outside the solar system. A paper describing this milestone finding was published in the journal Nature on August 25.

Just over four light-years from the solar system lies a red dwarf star that has been named Proxima Centauri, as it is the closest star to Earth apart from the Sun. This cool star in the southern constellation of Centaurus is too faint to be seen with the unaided eye and lies near to the much brighter pair of stars known as Alpha Centauri AB.

During the first half of 2016, Proxima Centauri was regularly observed with the HARPS spectrograph on the European Southern Observatory (ESO) 3.6-meter telescope at La Silla in Chile, and simultaneously monitored by other telescopes around the world. This was known as the “Pale Red Dot” campaign, in which a team of astronomers led by Guillem Anglada-Escudé, from Queen Mary University of London, was looking for the tiny back-and-forth wobble of the star that would be caused by the gravitational pull of a possible orbiting planet.

The Pale Red Dot data, when combined with earlier observations made at ESO observatories and elsewhere, revealed the clear signal of a truly exciting result. At times Proxima Centauri is approaching Earth at about 3 miles per hour—normal human walking pace—and at times receding at the same speed. This regular pattern of changing radial velocities repeats with a period of 11.2 days. Careful analysis of the resulting tiny Doppler shifts showed that they indicated the presence of a planet with a mass at least 1.3 times that of the Earth, orbiting some 4.5 million miles from Proxima Centauri—only 5% of the Earth-Sun distance.

Although Proxima b orbits much closer to its star than Mercury does to the Sun in our solar system, the star itself is far fainter than the Sun. As a result, Proxima b lies well within the habitable zone around the star and has an estimated surface temperature that would allow the presence of liquid water. Despite the temperate orbit of Proxima b, the conditions on the surface may be strongly affected by ultraviolet and X-ray flares from this very active star—far more intense than the Earth experiences from the Sun.

This discovery will be the beginning of extensive further observations, both with current instruments and with the next generation of giant telescopes such as the European Extremely Large Telescope. Proxima b will be a prime target for the hunt for evidence of life elsewhere in the universe. Indeed, the Alpha Centauri system is also the target of humankind’s first attempt to travel to another star system, the Starshot (breakthroughinitiatives.org/Initiative/3) project.

Guillem Anglada-Escudé concludes: “Many exoplanets have been found and many more will be found, but searching for the closest potential Earth-analogue and succeeding has been the experience of a lifetime for all of us. Many people’s stories and efforts have converged on this discovery. The result is also a tribute to all of them. The search for life on Proxima b comes next….”

This artist’s impression shows a view of the surface of the planet Proxima b orbiting the red dwarf star Proxima Centauri, the closest star to the Solar System. The double star Alpha Centauri AB also appears in the image to the upper-right of Proxima itself. Proxima b is a little more massive than the Earth and orbits in the habitable zone around Proxima Centauri, where the temperature is suitable for liquid water to exist on its surface.