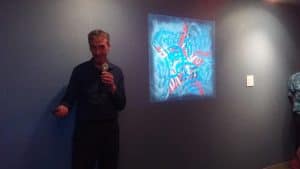 I agree with Wende Museum executive director and founder Justinian Jampol; the current exhibit, which opened to a standing room only crowd on Sunday, is my favorite. Museum curator Joes Segal (pictured left) breaks with museum tradition and presents at least two ways to view each artwork in the show by placing contrasting interpretations on either side of each piece.

“It is up to the viewer to decide for himself which he believes,” he said.
The concept of “Questionable History” is that facts are seen through human filters, including history. “Did the Berlin Wall fall because of Ronald Regan, or the political wisdom of Mikhail Gorbachev?” he asked the crowd.

He said museums traditionally present the viewpoint of the curator, but there are arguments among them, even down to the signage, which the art lover never hears. Museums show their bias about artwork by the way they display it, he said, “but the fact is, there are always many views on what the artist’s intention was, or what he was trying to project. There are always at least two different ways to view or present a work.”

One piece in Questionable History depicts the red star of Communism overlaid with a frieze of Coca-Cola logos. “You can see this as the end of Communism, defeated by Capitalism, or the imposition of both systems on society,” Segal said.

In Questionable History, it is up to each viewer to make their own decision on which intent the artist had or on how they themselves interpret the art.

The finale was a delightful 1950s animated film that is as relevant today, and as controversial in intent, as South Park or The Simpsons. It was made in East Germany on the theme of…well you must see it to decide what the theme is to you.
“I love the concept of this exhibit,” Jampol said. “It is a brilliant idea.”
The exhibit runs from August 22 to November 18, 2016, at the Wende Museum, 5741 Buckingham Pkwy, Culver City. The Wende is open Fridays from 10 to 5. Admission is free. Call 310.216.1600 or go to www.wendemuseum.org, for more information.