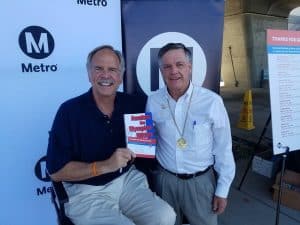 City Manager’s Office
• Olympic Champion Visits Culver City’s Expo Station – On August 10th, Mayor Jim B. Clarke welcomed four-time Olympic champion John Naber to the Culver City Station of the Metro Expo Line( As pictured left.)  Naber broke four world records while earning four gold medals at the 1976 Montreal Games. Mr. Naber’s appearance was the latest in the on-going promotion by Metro and the Los Angeles 2024 Olympic Candidature Committee to thank riders for going Metro and to build enthusiasm and Olympic spirit for a bid by Los Angeles to be the host city for the 2024 Summer Olympics.

• Culver City’s Boulevard Music Summer Festival Comes to a Close – The community enjoyed this summer’s free, Thursday night concert series, which included a variety of performances from six groups and concluded on August 11th. Photos from this concert, featuring singer Missy Andersen, are included below.

• Fox Hills Park Pride Day – The Annual Fox Hills Park Pride Day took place on Saturday, July 30th and experienced one of the most enthusiastic turn-outs ever! Nearly 40 people showed up to help beautify the park – by picking up trash, weeding the slopes, and assisting with planting. A college student who happened to be passing through was so energized by what he saw, he asked if he could stay and help and ended up weeding for three hours! Two middle school students even expressed their disappointment when the event was over, and it was time to collect their tools. Thank you to everyone who turned out to help, making this the most productive Fox Hills Park Pride Day to date!