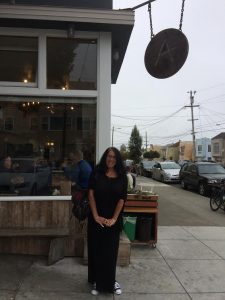 Earlier this week, one friend said to me, “you’re living a life that many only experience after retirement.” Later that same day, another friend texted, “you’re living the life!” Why did I receive such comments twice in one day? Because I was on my way up to the Bay Area midday on a Wednesday. And I’d just come back from nearly a week in Catalina, flanked by a series of Facebook postings at fun eateries and beverage establishments with family and friends. Friends have become accustomed to my postings from exotic destinations, and readers seem to enjoy my travel essays most.

I am “living the life.” There is no greater blessing in life than healthy, productive, happy children, and the lure of witnessing my two sons living their lives successfully drives me up to the Bay Area more frequently than they might even like. When I visit them, we share as many meals as we can together, Yelping genres of cuisine and/or geographical locations; sometimes we take scenic hikes or get yet-undiscovered sites under our belts. I think what I love most, however, is buying my sons things for their living quarters! This trip was specifically for that; I had three weekdays off, so even though one son was still finishing summer back in Culver City, I partook of the extreme pleasure of shopping sprees to help furnish their places. Shoe buying addiction aside, there’s tons of pleasure in welcome mats, cutting boards, and electric skillets, too.

I imagine that my friends termed my claim for being able to come here often as “the good life,” but it’s not only my jaunts to The Bay Area that garner such speculation. It is also my penchant for begging for time, borrowing from my credit cards and stealing away over every break from work I can get.

Travel is, perhaps for most people, a commodity. It is to be saved up for, something to do on special occasions, something you do when time is bestowed on you, like during the corporate two-week vacation, or on a honeymoon, or, case in point, after retirement. The problem with that, for me, is that I’ve known too many people who kicked the bucket before their bucket list kicked in. To that end, every trip I hake is an affirmation of being alive, and well enough, to go.

Another urgency for my travel is the knowledge that things change. I pride myself on having been to Berlin just after the wall fell, and then again recently, but it’s too bad I didn’t get there before the wall fell. I was in China in the 80’s, before the current boom, and in Hong Kong before the handover. I therefore can look forward to seeing the new China, when the opportunity presents itself. I went to Israel in 1982, and waited thirty years to return; talk about witnessing changes in a place that’s been inhabited since the beginning of time! These are just a few examples, but, that’s what I look for in terms of timing: opportunities that present themselves.

Yes, I “lived the life” last year when I was fortunate to have been allowed to tag along with a friend to a wedding in India; I was also fortunate to have been allowed a few days of time off during my regular work schedule. When an opportunity like that presents itself, I don’t look at price tags, I take the risk of charging stuff on my credit cards – that’s what they are for – and then I pay them off according to calculated schedules that I set for myself. I know a lot of people who work for themselves and therefore have highs and lows of income. The price to be paid for that kind of a career is that you might not be able to take such risks. For the price that you pay for working “for the man,” however, you do get to allow yourself more latitude to use credit.

Speaking of life experiences that came from a willingness to travel, I lived in Japan from the late seventies through the early nineties. For part of the time, I worked for the world’s most famous credit extending company: American Express. Although I worked in the travel division, I was trained thoroughly on the credit card side as well. At the time, the concept of buying on credit was only just washing up in the shores of the Japanese archipelago; the Japanese were notorious savers, and they generally bought what they could afford. As their savings skyrocketed in the 80’s, they bought more and more, but the financial culture was cash based. An interesting story of the time: we at American Express realized that our biggest competition was not other credit cards, but rather, what we called “face on file” (as opposed to Amex’s then ubiquitous travel product “signature on file”). In Japan, you at would be so well known in your neighborhood that you could go into a restaurant or bar, or really any local establishment, have some drinks, and be billed later. Japan is categorically NOT a melting pot; even in a metropolis like Tokyo, everyone knows where you live. Hence their allergies to foreigners mixing into the mix.

Let it be said that when I do steal away for my trips, I miss home. I lead the good life there too, with a meaningful job, a home I own minutes from work and close to the beach, a city I grew up in – still surrounded by friends and family, not to mention my active participation in three dance communities. When I’m gone, I miss this or that event in my own town. Whenever I’m asked what superpower I’d like to have – it’s surprising how many times I have been asked that question – I am always wishing that I had the superpower of being two places at the same time.