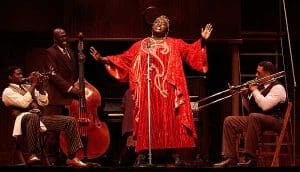 Phylicia Rashad, who directed Wilson’s “Joe Turner’s Come and Gone” at the Taper in 2013, will direct this groundbreaking play that depicts the racism and exploitation in the music industry through a 1927 recording session in Chicago with a legendary blues singer. “Ma Rainey’s Black Bottom” is inspired by the real-life Gertrude “Ma” Rainey.