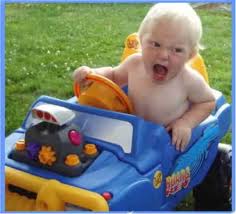 As I pulled into the left turn lane, with my turn signal on, someone behind me opted to accelerate and lean on the horn. This is the third time in about six weeks. You know the style, not a ‘beep’ on the horn, but that long, loud ‘WAAAAAAAA’ that sounds like someone has their elbow planted in the center of their steering wheel.

Because, it seems, I slowed down in advance of pulling over to make a turn. With my signal on. WHAT? Really? I didn’t cut my speed in half, I didn’t stop in the middle of the road. I wasn’t impeding anyone’s progress in any way. But for the third time, someone is letting me know they are pissed off.

A recent study published on the site Fiscal Times put Culver City at #19 in the nation for road rage. This was data taken from social media, so the backlighting seems to reveal that we are actually #19 in posting about it. But, that someone feels the need to blast me with their horn for slowing from 40 mph to 35 as I pull out of traffic and into the turn lane, that’s just bizarre.

What are we so angry about?

The first time, I just dismissed it. Someone out there just having a bad day, needed to blame someone for something, lucky me. The second time this happened, I had a long laugh, as the car blaring the horn at me was a recent model VW bug, a light lemon yellow, the car that was designed to have a flower vase attached to the dash. This is road rage? Holy wow, I thought, don’t tell them I’m wearing navy blue and black at the same time, they might freak out completely. Pearls before noon? They may open fire.

What are we so very angry about?

My current ride is even totally devoid of bumper stickers, so it’s not about my politics, my religion or my sense of humor. I drive plenty fast, but I do stop for yellow lights. So what? WHAT??

The worst road rage I ever witnessed was on the always heavily congested Santa Monica Boulevard. The nanosecond the light turned green, a red Fiat honked at the brown Jeep in front to move. Even though the light was green, there was nowhere to move to, and so it took a few seconds. More honking. This happened at every light for about four blocks, and finally, the brown Jeep just turned off his car, and sat there through the whole light, until it was red again. Red Fiat became psychotic, jumped out of the car and ran over to the driver’s side of the Jeep. This was the moment when my lane moved, and I got to make a right turn and gratefully get away from the whole show. It wasn’t on Eyewitness News that night, so I guess there were no fatalities.

Back to the online study, it seems we are not as angry as Beverly Hills (#15) or Santa Monica (#11) two cities we often compare ourselves to, and of course, Los Angeles topped the list (#1) to no one’s surprise.

A great deal of the Culver City traffic is people just driving from Los Angeles to Los Angeles, through Culver City. Maybe they should stop listening to speed metal, and put on some jazz. Maybe that fourth cup of Starbucks is feeling more like cocaine than caffeine. Maybe they could just pop up the Bluetooth and confess they will be late.

Your car horn is not a musical instrument, nor is it a bulldozer to clear your path, nor is it a laser to punish those you deem to be in the wrong.

There is nothing wrong with the way I’m driving. Take your temper tantrum off the street and go park yourself.