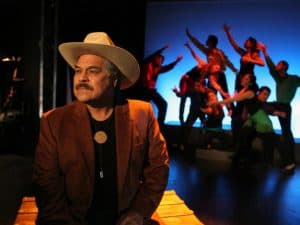 Center Theatre Group celebrates 50 years in the iconic Mark Taper Forum with the 2017-2018 season announced today by Artistic Director Michael Ritchie. The new season features five plays that represent the past, present and future of the theatre, plus a special immersive event on the streets of Los Angeles.
“Theatre has always created an extraordinary connection between artists and audiences,” said Ritchie. “Nowhere is that more clear than in the uniquely intimate space of the Mark Taper Forum. And that connection continues well beyond the curtain call in plays like Luis Valdez’s ‘Zoot Suit,’ (pictured above) which changed the cultural landscape when it premiered at the Taper almost four decades ago and will continue to offer a vital insight when it opens our 50th season at the Taper in 2017.”
“I am also excited to welcome back Rajiv Joseph with the world premiere of ‘Archduke,’” Ritchie continued. “Drawing on Rajiv’s signature dark comedy and ability to draw parallels between current and historical events, this new work offers a fascinatingly personal look at the path to terrorism.”
“MacArthur ‘Genius’ Grant winner Tarell Alvin McCraney comes to the Taper for the first time with his powerful new work ‘Head of Passes.’ Phylicia Rashad is recreating her tour de force performance from the production at The Public Theater earlier this year. And we will present our first play by Quiara Alegría Hudes with her Pulitzer-winning ‘Water by the Spoonful.’”
“We conclude the season with the world premiere of ‘Soft Power,’ created for the occasion by Los Angeles-born David Henry Hwang,” said Ritchie. “Seeing shows at the Taper as a young man helped launch David’s journey toward a life in the theatre. Now he is one of the most important voices in American theatre and the ideal playwright to send the Mark Taper Forum into its next half century.”
“Our 50th anniversary also includes a special event,” added Ritchie. “‘Remote L.A.’ is a production that literally takes the performance out of the theatre, changing the way we see our city and interact with the community at large.”
“Over the past 50 years the Taper has been a place to explore diverse perspectives, experience new ideas and be entertained by amazing storytellers. This theatre has sparked countless conversations, and as I look at our upcoming season and many seasons to come, I know it will spark a million more,” Ritchie concluded.