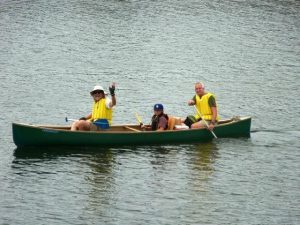 On Thursday morning, July 7th, Ballona Creek Renaissance (BCR) enjoyed participating in an REI/Heal the Bay-led kayak and canoe adventure along Ballona Creek. Paddling upstream about 2.75 miles with the rising tide from the old boat launch next to the Pacific Avenue bridge, we reached the end of the soft-bottom estuary under the Centinela Avenue bridge—all-in-all about a 5.5-mile round trip!

BCR’s Deb Gregory rode in one of the two-person REI kayaks while Jim Lamm and Deb’s son Sean joined BCR’s Blake Hottle in his canoe Photo above). BCR’s Amy Rosenstein, Bobbi Gold, and Cathi Lamm followed the boaters’ progress from the paths along the creek banks.

Although we traveled through a waterbird and fish area and saw osprey, cormorants, herons, and many other species, they generally seemed unphased by our passage; the rising high tide probably helped. The only exception seemed to be some startled ducks among the reeds near Centinela–not a normal area for water craft.