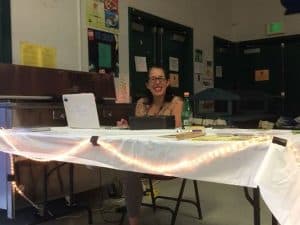 In my Ruth’s Truth of last week, I said of my own high school experience, “I had none of the barriers to success that my refuseniks at Culver Park Continuation School or CCUSD’s IAcademy have to deal with for sure.” If quoting one’s own self is as egotistical as speaking about oneself in the third person, mea culpa. As I wrote those words, I realized I’d soon be weaving them into another yarn of an essay.

It is true that my home life was relatively idyllic; I have nothing to bellyache about. Still, through my teens and until some point mid-college, I was not comfortable in my own skin. Upon reflection, I think I felt weird mostly because of the gnawing obsession I had with Japan and all things Japanese. I couldn’t ever get enough; it was like an addiction. To this day things Japanese are comfort food to me. Later in life, I overcompensated for my former social queasiness with so much self-confidence that people these days try as they might to shut me up. My tendency to pontificate even in writing landed me with my own column here in Culver City Crossroads!

So let me get back to qualifying why I think of our students at Culver Park as “refuseniks.” First, I am fond of using the word “refusnik.” As a student of (and writer about) Jewish history, the phrase always seemed to roll off my tongue. After writing last week’s piece, however, I looked it up to find that the word has two meanings. The first meaning, as one might think, is indeed pulled right out of the annals of Jewish history; Wikipedia states, “Refusenik was an unofficial term for individuals, typically but not exclusively Soviet Jews, who were denied permission to emigrate by the authorities of the former Soviet Union and other countries of the Eastern bloc. The term “refusenik” is derived from the “refusal” handed down to a prospective emigrant from the Soviet authorities.” Our students are NOT refuseniks in the sense that they were refused by authorities, because our intention, district-wide, is to do as much as we can for students who are struggling.

The second definition is the one I mean when referring to Culver Park-ites and our other alternative education customers. That definition, according to Merriam Webster.com, is “a person who refuses or declines something.” I consider students who end up pursuing our routes of alternative education to be “refuseniks” because they come to us when the traditional K-12 educational setting has not been a “fit.” This says to me that the student is basically refusing to go along with the regular fare that K-12 public education serves up.

Some people who don’t fit in expend efforts to try to fit in; they work hard, maybe even become the highest of achievers. Feeling left out, however, frequently causes people to check out altogether. I believe that this “checking out,” this apathy toward “getting along,” is a form of refusal, hence my moniker “refusenik.” Becoming a refusenik about your K-12 education can happen at any time, and manifest in the form of bucking the system by not doing homework or classwork, resulting in F’s. Not coming in with homework is one thing, but not being “in the moment” for classwork is another; it results in off task behavior issues, which lead to detentions and suspensions, lost time, and ultimately, lost knowledge, making it harder to progress through the system. Feeling left out begets being left out.

Having a stressful home life, and, for whatever reason, being on the fringe instead of the center of the majority of students in a classroom or a school itself can cause a person emotional pain. Emotional pain leads to not only physical withdrawal (absences and tardies) but can also lead to emotional withdrawal into substance and other abuse and addiction.

To get to know our students in alternative education, is to understand why they might not feel like fitting in with everyone else. In our recent end-of-year presentation to our school board, we stated the fact that, “100% of our students (at Culver Park High School) have dealt with one or more ‘barriers to success’ when they walk through our gates.” Barriers to success include, first and foremost, unstable home environments such as: non-amicable divorce situations, addictive behavior, alcoholism. emotional and/or physical abuse, abandonment, death, incarceration, homelessness, poverty, and immigration-related issues, to name a few. It’s hard for a person of any age experiencing these issues to focus on day-to-day tasks, whether they be academic schoolwork, extracurricular activities, social situations, and jobs – for those already in the working world – when home is not a solace, but instead a source of stress.

Our answer to help such students is really very simple. We surround them with a warm, loving environment. We engage colleagues who feel the same way, creating the proverbial village out of our campus. Our people begin by having love in their hearts – rachmunes, as we say in Yiddish – for our students. After that, everything else is easy: all you really need is the ability to think creatively. Of course, since we’re a public school, all of our teachers must be credentialed in the subjects that they teach. However, every single one of us, from our maintenance crew to our principal, interact directly and personally with each student to ensure they get what they might need on a particular day. I am not and never will be a “STEM” (Science, Technology, Engineering, Math) teacher in any way, shape or form, but, parenting as I did when my own children were young, if they struggled with a page of math problems, I would at least summon up the chutzpah to sit by their side and try to suss out the page of work. Likewise, I’ve worked on math a ton of times with our Culver Park students, and usually found that they eventually figure it out themselves as we spoke aloud together about the problems. In the end, no matter what the subject, isn’t that always how problems are solved?