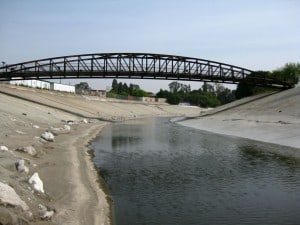 There is quite a lot of Ballona Creek that runs through Culver City, and it’s going to be our legal responsibility to make sure that water is clean. While taking care of the environment is vital, it’s not going to be cheap. The estimated $125 million needed to meet the requirements of the law may be partly funded by a parcel tax.

On November 8, 2012, the California Regional Water Quality Control Board – Los Angeles Region adopted Order No. R4-2012-0175, “Waste Discharge Requirements for Municipal Separate Storm Sewer System discharges within the Coastal Watersheds of Los Angeles County”  The permit includes strict requirements termed Total Maximum Daily Loads (TMDLs) which are numerical limits for pollutants such as bacteria, heavy metals, toxics and trash in the affected water bodies (Ballona Creek and Marina del Rey).
There are severe penalties for non-compliance with these numerical limits, up to $10,000 per day per violation. In addition, non-compliance exposes the City to potential third party lawsuits, which is another potentially significant impact to the City’s fiscal health. These financial impacts could reduce City services that benefit Culver City residents, including, but not limited to, public safety, parks and general government services.
In order to address the strict requirements of the Permit, the Permit allows the City the flexibility to develop an Enhanced Watershed Management Program (EWMP) to implement the requirements of the Permit on a watershed basis through customized strategies, control
measures, and Best Management Practices (BMPs). The construction and operation of the projects proposed in the EWMP will require the expenditure of significant City funds and currently there is no dedicated funding source for this purpose.

After years of planning and development, the City along with other cities in the Ballona Creek and Marina del Rey watersheds submitted their draft EWMP to the Regional Board and received approval in March 2016. In the coming months, the City must implement its portion of the approved EWMP to remain compliant with the Permit. The EWMP comprehensively identifies project opportunities within the City and watershed boundaries. Such opportunities include development of a green streets program including projects that infiltrate and filter storm water and urban runoff within public right-of-way, such as parkways
and parks; construction of multi-beneficial regional projects that capture and clean large volumes of storm water/urban runoff; and implementation of Low Impact Development practices that require new developments to clean and infiltrate storm water and urban runoff
emanating from private property. The City does not have any specific funding set for stormwater compliance.

The City is requesting assistance from Culver City taxpayers to help reduce/eliminate harmful pollution from entering our waterways and
protect local sources of drinking water from contamination. The tax measure would fund innovative infrastructure projects throughout the City and watershed that will capture and clean storm water/urban runoff before it enters waterways such as Ballona Creek or Marina
del Rey. Some projects will be designed to re-use water or recharge local sources of ground water. In this way, the captured runoff becomes an asset, rather than a liability. Full implementation of the EWMP, which is required to comply with the Permit, is estimated to cost the City up to $125 million. The proposed measure would only partially fund this
requirement with the average homeowner paying roughly $99 a year, generating an estimated $2 million in annual revenues that may only be used for pollution prevention.