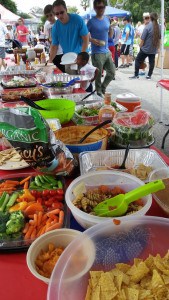 America celebrated its 240th birthday in style Monday, and while it may be a mere toddler among more venerable countries around the earth, it celebrates with the best. Block parties dating from the 90s, fireworks turning the town into a war zone sound-alike until past midnight, parades of kids on flag-draped bikes, flags everywhere, the smell of hot dogs and cool sundaes, it was a fitting birthday and a lot of fun. Now on to the conventions.