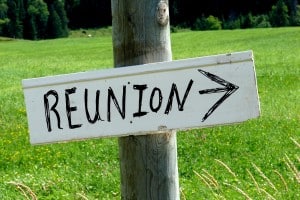 My 40th high school reunion is coming up this month. I have been ambivalent about spending the $130 it takes to attend, and was even more irresolute at the thought of also having to pay to bring a significant other along. $260 for an evening out? And for what – just to huddle at a table with a few cronies that were my comrades then, and have managed to stay in good graces over the years? Like many celebratory events, high school reunions are not always the social events they are cracked up to be. In fact, the high school social experience itself was, and is, not always what it’s cracked up to be.

I recall loving what was then called “junior high.” I went to Webster Junior High, and was able to walk, or ride my bicycle to school. I had all of my friends from Mar Vista elementary school, and made new ones that fed in from other local schools like Charnock Elementary, my reunion “date” was one of those; we met in 7th grade English class. Then, as now, the 7th grade curriculum included public speaking standards, and we cowered in fear of having to make speeches under the scrutiny of Mr. Garvin. In 9th grade (junior high was grades 7th through 9th), our history teacher wheeled in a TV, and we watched the Watergate trials live. It was 1973. Then and now, junior high, middle school, whatever you want to call it, doesn’t really count. It is still a good place to be, don’t get me wrong; I taught middle school for ten years. But the fact of the matter is that most, if not all,of the concepts – “standards” if you will – are merely review standards from elementary school levels or preparatory standards for high school.

High school, on the other hand, IS the real thing. Performance there, from the classroom, to the sports field, to the stage, determines where you will end up in college, and, often, in life. Passions are ignited, habits are formed, talents are tapped. Despite the fact that I did not have the litany of “reasons” for not feeling a part of things, I never felt like I fit in. I had none of the barriers to success that my refuseniks at Culver Park Continuation School or CCUSD’s IAcademy have to deal with for sure, but not so much of the angst you see depicted in fictional representations of high school either.

As far as diversity went, I was part of the majority on all counts. Part of it may have been that I, along my closest friends, were really supposed to have gone to Venice High School. University High School, however, was perceived at the time to have been “better.” Minus all the rigamarole of charter school options, point-systems, or the like, parents found ways, within LAUSD, to show residency in the geographical areas of choice, and off we went. Part of my outsider feeling might have been because I did not, in fact, live in proximity to the school; I came by a chartered Santa Monica Bus. Not yet the forced “bussing” situation, still, I felt like I was (and I was) from the other side of…not the tracks, but, National Blvd.

A highlight from my UniHi experience was a class called “I Hate PE,” taught by the high school’s basketball coach, who had been without a proper gym since the 1971 earthquake. He jump-started me onto the path of being the goal-oriented individual I am today. Whatever I did at Uni, whether I fit in or not, got me straight into UCLA, a still significant, albeit easier feat than it is today.

So, why bother with high school reunions? You go just because you CAN – because you are alive enough, and well enough, to do it. My former high school “sweetheart” (yeech, what a term, and weren’t “like that”) and I have remained friends through the years, and we have been jockeying via iMessage for the past two months, asking each other, “Are you gonna’ go? Have you bought the tickets yet?” “Naw, maybe next week.” Finally, last week, I pressed on the link for the reunion website and I was, like, “Wha? $130 a person?” We could have made it a nice affair for ourselves and our significant others, but they both claimed to care less about going. Who wants to be at a table full of “remember when’s,” which inevitably dominates reunion conversations.

I only wanted to bring my (recent) significant other in the first place, because it was “his turn.” By “his turn” I mean: I was married to one bloke for the 10th reunion, but we were off in Japan and didn’t attend. By the 20th, I was married to another chap, so I brought him. At the 30th, I had already divorced one and two, so I brought a third dude, my beau at the time. Now with a fourth swain, I figured it was his turn. But not to the tune of $130! Thus, we came up with the revolutionary idea of us two high school peers going together! I remarked how ironically appropriate it would be for us to go as “dates” to the reunion, and he retorted, “It’s a sign that the end is near.”

We ain’t going to dance, or to take a souvenir photo for the shekels they charge, or to see people we haven’t seen in forever. We’re just going to say that we did, I guess. What with social media these days, and especially with my beloved Facebook, things like reunions seem less significant than in days of yore. Still, just as when you start a collection of, let’s say, Starbucks city cups (I have one)…you can’t just stop all of a sudden and say: enough. There’d be no proper closure; and besides, there can never be enough memories to collect in this lifetime. And that’s why you go to a reunion.