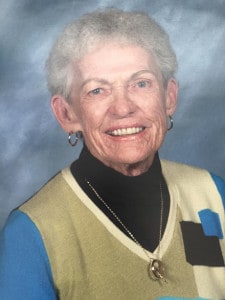 On June 4th, 2016, at 10:25 AM, Elaine Goodyear passed away at her home on Motor Avenue in Culver City. Her caregiver and her son Greg were at her side. Elaine had been in failing health for the past several years and suffered from heart disease and dementia. She was 89 years old.

She was preceded in death by her mother Virginia Caroline Wellman Hackett Fitzgerald and her beloved husband of 54 years, Culver City High School Coach and Athletic Director Del Goodyear and was survived by her son Greg Goodyear.
Mrs. Goodyear was universally loved by everyone she met and constantly gave of herself to help others. She was also an animal lover. She had many pets over the years and would also feed any animals she encountered as she walked the neighborhood around her home on her daily 2-mile exercise excursions.
Elaine was born in Minneapolis-Saint Paul, Minnesota to John Vincent Hackett and her mother Virginia on October 28th 1926. Her mother divorced her dad 3 years later because he was physically abusive to her. Her mother remarried in 1936 to James “Paul” Fitzgerald, a lifelong Navy serviceman. They moved
to California and lived in San Diego. Elaine was sent off to live with the Janns family for financial reasons.
They were very wealthy landowners in the Canejo Valley, in the area now known as Thousand Oaks. She graduated from Junior High School in Los Angeles in 1940 and then went back to the San Diego area to rejoin her mom and stepdad and graduated from San Diego High School in 1943. Because she was a great student and highly intelligent, she entered UCLA at the age of 16, majored in English and graduated in only 3 years. While at UCLA, she became a member of the Kappa Delta Sorority and remained in contact with many of her sorority sisters for life.
Elaine got her teaching credential the next year. She was set up on a blind date by a friend and met her future husband. They dated for a few years and she married Del Goodyear on February 4th, 1950. Elaine got a full time teaching position at Emerson Junior High in West Los Angeles and taught English
and Theater Arts. She was a dedicated and hard working teacher and continued teaching full time for 13 years. All of her students loved her. Among her students were Robert Redford and Gary Lewis (Jerry Lewis’ son) of the influential early rock band  “Gary Lewis and the Playboys.”
Mrs. Goodyear kept busy with school and grading homework but she still managed to be a super mom, cooking dinner every night, making and sewing all her own clothes and taxiing her son and his friends to all of their sporting events and practices.
Del and Elaine purchased their first and only home in the then brand new housing tract in Carlson Park through the GI Bill in early 1953 and she lived there until her recent death.
Del said one of the smartest investments the Goodyear’s ever made was when they purchased a lifetime family membership in the Deauville Country Club (now the Braemar Country Club) in Tarzana Hills. He got to indulge his lifelong passion for playing golf and take Elaine along and teach her to play without ever paying a green fee. Elaine gave up her full time teaching position and became a frequent substitute usually working every Monday and Wednesday through Friday. She would play golf on Tuesdays at Braemar with
her lifetime golfing friend Marti Obink and others.
Her other passion was her religion. She was a practicing Catholic until she met Del and then became an active and involved member of Grace Lutheran Church in Culver City helping to select several of the Pastors including Pastor Jim.
Later in life Elaine developed an amazing sense of humor and told great jokes. Unfortunately, when Del’s health began to decline, her personality changed. She became slightly depressed. Del was such a big part of her life that she had a lot of trouble adjusting emotionally to his prolonged illness. When he died, a portion of her died with him.
Elaine had a minor heart attack a few years ago and Greg found an amazing care provider, Joyce Elder, who came in 3 times a day 7 days a week to make sure that she was safe and to administer her medications. Joyce also fed her and did light housework. Joyce is a member of Grace Lutheran Church and was recommended to Greg by Pastor Jim. Joyce truly became a trusted, loving member of the Goodyear family. Elaine loved her like a daughter and appreciated her so very much.
Elaine has finally gone to heaven to rejoin her beloved husband of 54 years so now she will be eternally happy!

In lieu of flowers, the family asks for help with the burial expenses and that you make a donation of any amount to a secured website: gofundme.com/elainegoodyear or you may send a check made out to: Elaine Goodyear, 4354 Motor Avenue, Culver City, CA 90232.