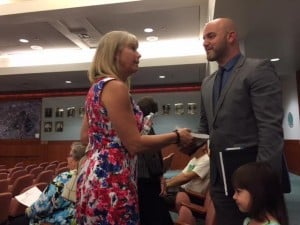 The school board meeting of June 28, 2016 was an evening of arrivals, departures, promotions and awards. Superintendent Dave LaRose ended his four years as the head of the district and the school board agreed to hand the reins to Dr. Joshua Arnold, (shown left being greeted by Assistant Superintendent Dr. Kati Krumpe.) Long time El Marino Language School Principal Tracy Pumilla was promoted to District Director of Curriculum, and Mina Shiratori steps in as Interim Principal at El Marino. Claudia Arriola joins CCUSD as the new Director of the Office Of Child Development, and retiring employee Rosann Nakanishi was gifted with a CCEF  ‘building block’ by her colleagues as a gesture of thanks for her years in the Special Education Department.

The end of the school year is usually a time of shift at the district level, and LaRose had given the board several months notice on his departure. (See video IMG_2054 ) Both board and the staff wished him well, and his final presentation was a reiteration of his emphasis on quality and inclusion. “Clarity precedes competence,” LaRose spoke to reinforce his powerpoint presentation, “and our continued focus on education that is ‘Deeper, Stronger and Better’ will help the district to maintain the high level of excellence we have set as our standard.”

Dr. Joshua Arnold, who was teased by Board Member Kathy Paspalis for 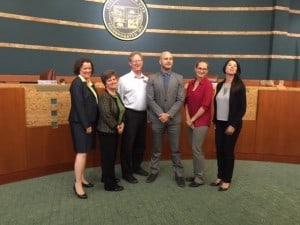 his physical resemblance to LaRose, brought his wife Claire and his two young children, Isabella and Anthony, to the meeting with him. Dr. Arnold most recently served as the Assistant Superintendent of Educational Services in the Los Alamitos Unified School District in Orange County. He was unanimously confirmed by the board. Board member Sue Robins said “We are very excited about getting to work with you.” Board President Dr. Steve Levin stated “[Arnold] is a terrific, charismatic, leader who will keep CCUSD moving in the right direction, deepening our commitment to the values and strategies which make this a great school district.”

Arnold offered that he was “very excited to be joining the district, and indeed, the family of CCUSD,” and would be meeting with LaRose to discuss transition this week.

Both Jeannine Wisnosky Stehlin of United Parents of Culver City and Jody Reichel of the Culver City Education Foundation spoke to thank LaRose for his enthusiastic leadership, and welcomed Arnold to the post.

Arriola, the new Director of OCD, brings with her 25 years of experience in the field of child development, and is currently pursuing her doctorate.

Nakanishi is retiring after 35 years with CCUSD.