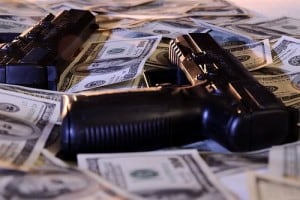 The regular monthly meeting of the Culver City Democratic Club will feature the film “Making a Killing: Guns, Greed, and The NRA” It tells the stories of how guns, and the billions made off of them, affect the lives of everyday Americans. It features personal stories from people across the country who have been affected by gun violence, including survivors and victims’ families. The film exposes how the powerful gun companies and the NRA are resisting responsible legislation for the sake of profit – and thereby putting people in danger.

The film looks into gun tragedies that include unintentional shootings, domestic violence, suicides, mass shootings and trafficking – and what we can do to put an end to this profit-driven crisis. Through this film and campaign, Brave New Films will work with partners to fight for a country where public safety is more valued than profit.