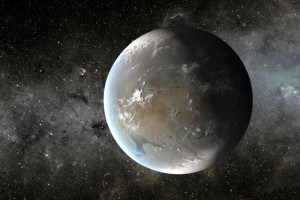 A distant planet known as Kepler-62f could be habitable, a team of astronomers reports.

The planet, which is about 1,200 light-years from Earth in the direction of the constellation Lyra, is approximately 40 percent larger than Earth. At that size, Kepler-62f is within the range of planets that are likely to be rocky and possibly could have oceans, said Aomawa Shields, the study’s lead author and a National Science Foundation astronomy and astrophysics postdoctoral fellow in UCLA’s department of physics and astronomy.

NASA’s Kepler mission discovered the planetary system that includes Kepler-62f in 2013, and it identified Kepler-62f as the outermost of five planets orbiting a star that is smaller and cooler than the sun. But the mission didn’t produce information about Kepler-62f’s composition or atmosphere or the shape of its orbit.

Shields collaborated on the study with astronomers Rory Barnes, Eric Agol, Benjamin Charnay, Cecilia Bitz and Victoria Meadows, all of the University of Washington, where Shields earned her doctorate. To determine whether the planet could sustain life, the team came up with possible scenarios about what its atmosphere might be like and what the shape of its orbit might be.

“We found there are multiple atmospheric compositions that allow it to be warm enough to have surface liquid water,” said Shields. “This makes it a strong candidate for a habitable planet.”

On Earth, carbon dioxide makes up 0.04 percent of the atmosphere. Because Kepler-62f is much farther away from its star than Earth is from the Sun, it would need to have dramatically more carbon dioxide to be warm enough to maintain liquid water on its surface.

The team ran computer simulations based on Kepler-62f having:
An atmosphere that ranges in thickness from the same as Earth’s all the way up to 12 times thicker.
Various concentrations of carbon dioxide in its atmosphere, ranging from the same amount as is in the Earth’s atmosphere up to 2,500 times that level.
Several different possible orbital paths.

Shields said that for the planet to be habitable throughout its entire year, it would require an atmosphere that is three to five times thicker than Earth’s and composed entirely of carbon dioxide. (This would be analogous to replacing every molecule in Earth’s atmosphere with carbon dioxide, which means that the planet would have 2,500 times more carbon dioxide than we have.)

“But if it doesn’t have a mechanism to generate lots of carbon dioxide in its atmosphere to keep temperatures warm, and all it had was an Earth-like amount of carbon dioxide, certain orbital configurations could allow Kepler-62f’s surface temperatures to temporarily get above freezing during a portion of its year,” she said. “And this might help melt ice sheets formed at other times in the planet’s orbit.”

The research is published online in the journal Astrobiology.

Shields earned a master’s degree in acting from UCLA and worked as an actor. In January 2015, she founded Rising Stargirls, a program that teaches middle school-aged girls of color about astronomy and astrobiology using theater, writing and visual art. Teachers can request a free copy of the Rising Stargirls discussion guide and activity book through the program’s website [http://www.risingstargirls.org].