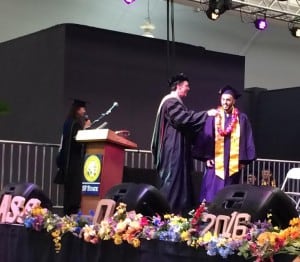 “What was your son’s major,” a friend asked? The question seemed so weird to me…I’ve spent thirteen years in education, which gets you used to phrasing such a question in future tense. The answer is “Recreation, Parks and Tourism Administration.” This is a degree only conferred by a CalState University, although similar majors do exist in other states.

Like all degrees, what is it really good for? It is as much of a resume builder as a degree in English, Political Science, or Linguistics. Only as good as the paper it is written on, unless you are able to show up at an interview and impress someone with your ability to see a thing through to the end. Extracurricular activities, travels, the high school diploma – it goes without saying, the college diploma, and whatever credentials, licenses, skills or other degrees you can pick up along the way are what will set you apart from the other twenty people who apply for the same job you do.

Cal States, San Francisco State in particular, from where my son will officially 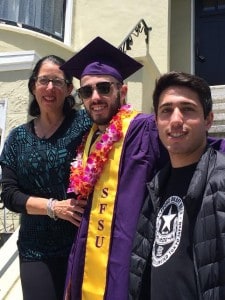 graduate today, are perfect choices for somebody interested in a utilitarian degree designed to differentiate a person in the workplace. They are also the perfect choice for high school graduate with 2.0 GPA’s or better who want to gain the ultimate in personal growth, transition into responsible adulthood, and age-appropriate social experiences. It is nothing less than a travesty that so few high school graduates choose this path. An even bigger travesty was quoted at my son’s department ceremony yesterday: only 30% of American adults have four-year university degrees. The majority of high school graduates choose two-year local colleges. The majority of that majority do not actually transfer after two years to four year institutions, they lose their way.

It’s a privilege when you know what you want to do before, during and after college. SF State was the first college that accepted my son, in December, before any other of the colleges he applied to had responded. He had applied for this major from the start, and the acceptance letter stated the major as well. During the college application process, he specially chose colleges within California by specific major. The experiences he’d collected in his youth, from day camp attendance to, eventually, becoming a counselor in day camps. He’d been out through language immersion through K-12, less for the expectation of language fluency than for the exposure to other cultures. International trips during spring break were also a priority for our family. Friends are and have always been diverse.

Back to my son’s major: the so-called “RPT” major is housed within San Francisco State University’s College of Health and Social Sciences. Majors should be enjoyable. My other son liked Physics in high school, and applied to colleges as a Physics major. At first, he was applying for Engineering, thinking it would be a better career-building pathway. What he really wanted, however, was to go to Berkeley. At some point, I got a clue that he might not get into Berkeley’s School of Engineering. So I asked him to switch his application to Physics, within Berkeley’s College of Letters and Sciences. He got in. And, guess, what? He found out that you actually don’t need to declare a major within the first two years at all and, another surprise: he hated his first Physics class, changed the class to “Pass/Fail,” and is currently in the best place in the world – Berkeley – to choose whatever major he wants. Here’s the deal about majors: they don’t really matter. When it comes to university degrees, what matters most if just that a person finishes what they began, in a reasonable amount of time, which, if one plays their cards right, is four years.

What my son says is that the work he hopes to do will likely not make him a lot of money, but that he’ll love what he does, and he’ll make the world a better place. He may go for a graduate degree after a little more experience at full time jobs in the working world. The other son, still at Berkeley, is talking about grad school before entering the the workplace. Both are great options. The keynote speaker at SFSU exhorted the students to be willing to “accept an entry level job,” as everyone should. You have to be willing to work your way up. Not everything that we want comes delivered on an easy, silver, platter. The after college fact of the workplace is that college does not give you a job, but it without question puts you in a better place for not only the job itself, but for a better chance in a competitive marketplace, possibly better pay, and hopefully more opportunities for upward mobility.

Too many young people find reasons to talk themselves out of going to college, and too many parents, whether college graduates themselves or not, allow themselves to be talked out of insisting their kids go to college. What my son said to me today is this: going to college gets you out of your comfort zone of your home, your city, and the set of friends you may have had to that time. It helps you find out who you really are, when you push yourself to meet new people, make new friends and figure out how you want to live. I love how he was able to encapsulated the experience that way for me this morning.

What I can say is this: our whole family is ecstatic today to be celebrating this undeniably major accomplishment of perseverance, focus and dedication. I’ve been cluttering Facebook with our photos, and garnering “likes” worldwide. I know too, that this accomplishment is proof positive that I’ve done my job as a parent, as a citizen, and as a descendant of those who brought me here. There is no greater satisfaction, solace and success in life than that.