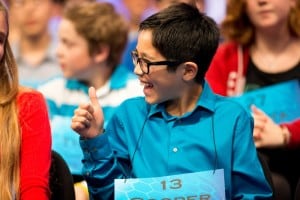 As many watched on ESPN Cooper Komatsu started his contest spelling cacomixl, “a catlike mammal found in southern North America, related to but smaller than a raccoon.”

He went on to correctly spell: glaucothoe, a young hermit crab; buccal, an adjective meaning related to the mouth; rerebrace, a piece of armor protecting the upper arm; an myoclonus, an involuntary muscle spasm.

All the way out to the ninth round, when Cooper stumbled with the spelling of illicium, a genus of flowering plant.

Cooper was among 45 spellers who advanced in the competition out of an initial field of 285 on Wednesday. He was among the top scorers on a 26-question multiple-choice spelling and vocabulary test taken Tuesday.

Cooper qualified for the national bee on March 15 by winning the Los Angeles County Scripps Regional Spelling Bee for the second consecutive year.

At the ripe age of  12,  Komatsu has a vast vocabulary, a great strength of stage presence, and a whole lot of hometown fans who are very proud of him.

Despite declarations from Scripps that they wanted a single winner at the end of the contest, the national spelling bee ended in a tie; Nihar Saireddy Janga, co-winner with Jairam Jagadeesh Hathwar, who was the youngest contestant to make the top ten.