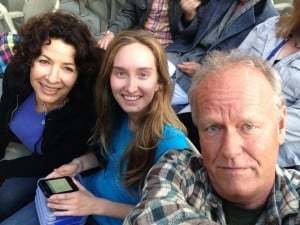 Well, this is Scott himself writing, so my memory may or may not be precise, but let’s give it a try.

During the course of the campaign, my wife (and a few other people) noticed that I was dragging my foot (not surprising, given that I had my left ankle replaced few years ago) and occasionally grasping for words, which IS not like me. I went to see my primary care physician, who immediately scheduled an MRI. That MRI, on April 20, detected a tumor in my right frontal cortex. So I missed the traditional reception/kiss off for Messrs.’ Weissman and O’Leary on April 25, indulging in a Functional MRI instead, which was quite an interesting experience.

On April 26, I placed myself in the care and the hands of Dr. Linda Liau of the UCLA Brain Research Center, who is, by all accounts, the best brain surgeon in the world. On April 26, she and her team performed a craniotomy on me, a process which lasted about 5 hours. Again, by all accounts, she did her best work on me, for which I will be forever unable to express my unbounded gratitude.

When I awoke after surgery, the attending nurses and doctors were especially concerned about any pain that I was feeling. I told them that my only pain was a kind of jolt in my jaw, whenever I tried to eat the delicious Lodge Bread and butter sandwiches (BEST FOOD IN THE WORLD!) my wife and daughter prepared for me each morning. One of the surgeons chipped in and said, “Yes, when we went in through the side of your head, we had first to go through the skin, and then I was in charge of drilling through the layer of muscle beneath the skin. And YOU must REALLY TALK a lot!!!” That’s when my family all fell over laughing.

Apparently he’d never seen such a well-developed layer of talking muscles. I protested that I’d just been through a campaign, and I like to eat, too. That did nothing to quell the gales of laughter in the room.

After the surgery, I had the privilege of speaking at great length with Dr. Timothy Cloughesy, head of the Department of Neuro-Oncology at UCLA, about the treatment options I had ahead of me (and yes, both of those puns were intentional. They’re almost impossible to avoid when you get to talking about this subject.)

I enrolled in two clinical trials immediately (and there will be more to come.) The first is a massive data-gathering project that won’t be of any benefit to me personally, but may radically change the future treatment of glioblastoma, with the potential to save thousands of lives. In a not-completely-accurate-scientific nutshell, it involves the process of using Functional MRIs to guide post-operative radiation treatments in real-time. I love this, because big data/pattern recognition is something I understand! Something I’ve been working with (on a less massive scale) for years! I understand this! How cool is that?

For those of you who either subscribe to the New Yorker or can find an old copy on line or in your dentist’s office, there’s a fascinating article about some other trials I may be involved with in the Nov. 16, 2015 issue. Annals of Science/The Gene Hackers by Michael Specter. Describes a technique called CRISPR for gene slicing and recombination, along with much, much more. Accessible to a layperson who’s relatively conversant in the science department. You’ll soon see why I feel as though I’m living in a science fiction movie. I have my own mouse, which my music teacher has named “Nathaniel.”

The biggest take-away, medically, from this is that the whole UCLA staff is just remarkable. Companies always love to say that they want to “exceed your expectations,” and they try to do that. Doesn’t BEGIN to describe our experience at UCLA. Every single person that we met was extraordinary. One that I can cite to give you an idea — when I was getting ready to leave the hospital, a nurse came in and said that he was going to shave me — “You’re going home!!! You have to look good!” In our conversation, I found out that he was originally from Nigeria, and had put himself through nursing school at Grambling State by working for 4 years on a Nigerian tramp steamer. He’d sailed around both capes (Good Hope and Horn). It’s hard enough to imagine sailing around the Capes in a brand new high tech tanker, let alone in a battered old tramp steamer. AND, on his nurse’s salary, he’s currently helping his son attend Graduate School at UCLA, where he’s studying Neuro-Biology. I said “You must be the proudest man in the world…..” AND he proceeded to give me the most wonderful, gentle, thorough shave of my life — because “I was going home.” The nurses were all extraordinarily professional, compassionate and just great people. The doctors were all off the charts. And remain so.

I’ve now embarked on the second of the two clinical trials, which involves an alternative drug to the normal chemotherapy regimen, and next Tuesday I get to go back in for radiation treatment and the functional MRI research study, each of which involves a separate hand made mask! How cool is that? My daughter and I have already decided on my Lucha Libre name (which I’m clearly gonna need) — H2Ombre (as in “Waterman”). Photos of the no-doubt theatrical masks will follow in a future column [here at www.CulverCityCrossroads.com]  That regimen will continue each weekday for the next 6 weeks.

The good news (aside from the hand made masks) is that the doctors have cleared me to paddle out into the ocean on June 4 for our annual ZachFest, in memory of my dear friend and surfing compadre Zach Solomon, who died 4 years ago. We’ve been having the memorial festival and paddle-out each year at the Manhattan Pier, along with a raffle and t-shirt sale to raise money for cancer research — and I get to join my tribe of water men and water women as we remember our dear Zach, and celebrate his and our own love for the ocean. I’ve also been cleared for a trip to the Napa Valley to join a group of old friends (one from grammar school, the others from high school) for our annual card-playing, good-food-eating extravaganza at my friend’s hand-built house on the mountainside overlooking the Napa Valley directly opposite the Culinary Institute of America.

Along with all that, I’ve enjoyed an extraordinary outpouring of good wishes, prayers, positive thoughts and home-delivered food from the denizens of this remarkable city we all call home. I evidently made some new friends knocking on doors all over town!! I wasn’t just interrupting people’s weekends, which is good to know. Especially after the bruising and disheartening way the campaign ended, it was a joy to open my mailbox and find so many encouraging, joyous well-wishes waiting for me. And did I mention how many people brought us food? If there’s an asteroid strike tomorrow, y’all can stop by here — we’ve got you covered for a few days while everything gets back to normal.

In closing, I’d like to say that the miracle of democracy has revealed itself again — on the first night that the new City Council met, I would NOT, in fact, have been the best qualified man or woman to be sitting on the dais. At the moment, it seems likely that you will all have another chance to make a decision on that score in about two years.

In the meantime, I’m catching up with a lot of long-deferred reading and writing, and practicing my bass guitar as often as possible – something that those of you who attended my campaign kick-off event know was also overdue.

Sincerely, and with thanks to all the neighbors and friends I’ve been “speaking” with, via email, text, FaceBook and in person. See you round town any day now!

Photo of Leslie, Molly and Scott