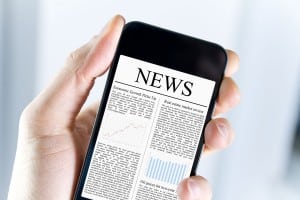 Where do you get news? What’s the daily go-to for the information you feel you need?

I was listening to Madeline Brand’s “Press Play” program on KCRW and heard a conversation that a majority of people now get their news from Facebook. We get our news curated by our friends. We rely on the other people in our lives to decide what we need to know. While social media makes this seem very new, it’s really very old.

An article in a recent Smithsonian magazine noted that news has reverted to what it used to be in the days of colonial broadsheets – opinions and perspectives that were simply trusted, or not. The journalism of Ben Franklin and Thomas Paine is op-ed all the way. The 20th century phenomenon of reporters who researched facts has been a brief interruption in our time honored opinion sharing.  The consolidation of company after company into one narrow channel of perspective has choked out the reportage. But business does business because of how we seek news.

This morning’s LA Times actually pulled a quotation from no less than President Obama from Buzzfeed, a site that is more known for it’s ‘listicles’ than it’s coverage of Supreme Court rulings. But hey, cheaper than getting an LA Times reporter to talk to him, and we trust Buzzfeed, right? Right?

But do you buy the LA Times? As a paper or subscribe to the site? The adage that you get what you pay for is well researched fact. We need reporters, and yet as a society we don’t feel we need to pay them to do the job.

I love a lot of things about Facebook. I love the way my friends will post articles from professional journals about astronomy or neurology that I will never otherwise cross paths with. I love hearing from people I went to school with who now live on other continents. The ability to give away a desk or invite people to a show is wonderful.

But if I sourced my news from Facebook, I would be standing in a room full of people shouting about Bernie, Hillary, and transgender bathroom privileges. As I do not require any more information about any of these issues,  I won’t be spending time reading them. And who is putting all this stuff out there? Do I have to check with Snopes.com?

How many times have you seen the comment “This is not The Onion?” The Onion,  once a weekly paper that has morphed into a website, used to be the prime source of news satire, before Comedy Central launched The Daily Show. But at least it was a recognizable source.

Culver City Crossroads policy of requiring people to sign their real names has removed a great deal of traffic on this site. Some locals feel very strongly that if they have to play fair, they don’t want to play. Why engage in dialogue that you have to admit to when you can just toss a remark and sign in as a muppet or a superhero? Or create a nom de guerre, and let your alter ego take the blowback?

Because we should be proud of what we have to say. We should be happy to own any remark we make. If not, don’t say it. When opinion becomes anonymous, we’ve crossed a line, and even Snopes.com can’t help you there.

When my friends do actually forward headlines from the Washington Post or the New York Times, that is news. But why wait for someone else to point it out?

I listen to a lot of NPR, but I also recognize that I may not really need hourly updates on the war in Syria. I read the LA Times daily, and The New York Times regularly. The New Yorker weekly. Once in a great while, PBS Newshour.

Two or three times a day – I’m scrolling through the newsfeed on Facebook. I’m just not sure I’d call what I get there ‘news.’