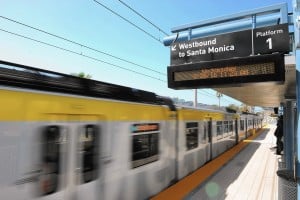 The Culver City to Santa Monica leg of Metro’s Expo Line won’t open until May 20, but the agency is making parking permits available beginning Sunday.

Metro will offer parking at three of its new Expo Line extension stations — 544 spaces total between three stations but 221 of those will require permits.

The reason for the fees? To help regulate high demand for parking spots, according to Metro Director of Parking Management Frank Ching. Parking will be available at the Expo/Sepulveda, Expo/Bundy and 17th Street/Santa Monica College stations.

The 221 permit parking spaces go on sale at 10 a.m. Sunday, May 15 at LAMetroParking.net. Those with passes will get to use those spots on a first-come, first-served basis between 4 a.m. and 9 a.m. on weekdays. The spaces will open up to everyone else after that.

“Metro’s transit parking program is an important first/last mile strategy and a key service to transit customers who rely on their car for a part of their daily commute,” Metro Chief Planning Officer Therese McMillan said in a statement. The parking spaces at the Expo/Bundy station will be angled street parking along the rail line by the station.

There are also another 239 spots available for $2 a day at those same stations. Expect to have your Metro card checked before you’re able to park, though.

“What’s slightly different is now all the parking spaces require a parking fee to park daily to manage our demand, and we also require a TAP card identifier,” Ching says.

Ching adds that checking that people are using TAP cards before they park, which reserves parking spots only for those who ride Metro, will be crucial to making sure the program succeeds.

People will be able to pay either by phone or a smartphone app that should be available on May 20.

Later this year, pay kiosks will be installed at the facilities. There are also plans to install equipment allowing users to go online and see how many spaces are available.

Metro is encouraging riders to consider walking, biking or taking the bus to get to the train. They note that the seven new Expo lines are all served by public buses from either Metro, Santa Monica’s Big Blue Bus or Culver CityBus — and both the Big Blue Bus and Culver CityBus take TAP cards.

You can see schedules here:

Metro.net
Big Blue Bus schedules
Culver City bus schedules
There’s also a new walking and biking bath that runs parallel to most of the Expo Line extension, according to Metro. You can bring your bikes on the train and or store them at bike racks and lockers at the new stations.

The parking program is scheduled to run for two years, but it will be evaluated every three months to see how effective it is and determine whether monthly permits, carpool or daily parking ends up being the most successful, according to Ching.

“Mainly, we want to make sure we retain our parking resource to support our transit users,” Ching says.

Metro spokesman Jose Ubaldo says the agency can’t say what changes might come from of any future evaluations.