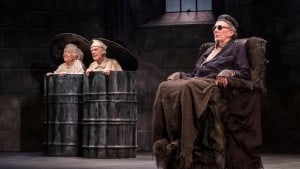 There is a timeless quality to Endgame. It can leave you questioning when this play takes place – is it historical? contemporary? dystopian? or just leave you wondering how long it will take these characters to figure it out, if they ever do.

Alan Mandell’s aristocratic Hamm asks “Can there be misery loftier than mine?” and the Beckettian tone is set high. Mandell has been an apostle of Beckett throughout his career, and his precision, his nuance is flawless in reflecting humanity’s flaws. The dark golden tenor of his voice offers the music of speech as an apology for the discord of meaning. Here we are – it is hopeless- here we are.

Barry McGovern plays Clov, the stiff legged servant, his patience and affection just barely holding his rage in check. His ability keep the action moving while maintaining the sense of the timeless pause is magical.

The pitiful parents in trash cans, Nagg and Nell, are just as deliciously detailed in their every utterance. Nagg, as played by James Greene, reflects a childish weariness while Nell, played by Charlotte Rae, almost blossoms with affection and understanding. Here we are – still – wasn’t it fun? Are we done?

The fact that McGovern stepped in to replace Rick Cluchey after his death late last year should intimate the key to this production. Here we are – for the time being – until we are not.

Endgame is funny, in the darkest possible way. It’s profound, taking only four characters and one set to offer a portrait of humanity. It’s a uncomfortable play that may awaken you to the pleasures of being uncomfortable. You are here – get there.