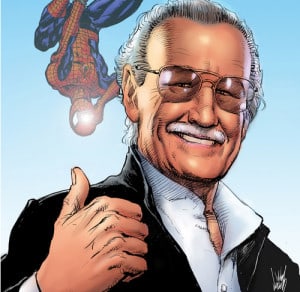 The one and only Stan Lee is coming to The Comic Bug on Free Comic Book Day. He will be giving 100 lucky COMIC BUG fans a FREE autograph!

At the CULVER CITY TEEN CENTER just a few doors down from The Comic Bug’s Culver City location, The Con Man creator/star Alan tudyk, ,PJ Haarmsa and Shannon Eric Denton will be signing free copies of SPECTRUM #0 from 11 a.m. to 12 p.m. SPECTRUM is a Free Comic Book release based on the fictional TV show that actors Tudyk and Nathan Fillion starred on prior to their stint on the con circuit on CON MAN.

Shannon Lee, daughter of Bruce Lee, will be signing copies of BRUCE LEE: THE DRAGON RISES FCBD EDITION along with writer Jeff Kline later in the afternoon (exact time TBD) at the Culver City event.

Back by popular demand, LOLA XOXO creator Siya Oum will be on hand to sign copies of THE COMIC BUG’s EXCLUSIVE SIYA OUM EDITION of MIGHTY MORPHIN POWER RANGERS: PINK #1.

Best oif all, there will a chance to meet and join the two creator groups currently running at The Comic Bug, THE SKETCHY BUGS and the female-run LADYBUGS.